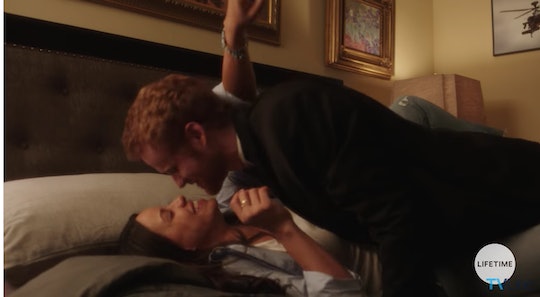 Can you believe it? The countdown is officially on for the royal wedding — because at this point, the big day is just over two months away. With that said, if you feel like you can't possibly wait until May 19, then I have some good news: Lifetime is dropping a movie inspired by Prince Harry and Meghan Markle's relationship. And it will debut six whole days before the couple exchanges vows in front of the whole world. Here's a sneak peek at the Harry & Meghan: A Royal Romance Lifetime movie because the royal wedding can't come fast enough.

It's only a 20-second clip, but guys, this new trailer makes me so excited about the upcoming Lifetime movie. As Us Weekly reported, the trailer was released on Friday, March 16, and it features a series of romantic — and steamy — moments between the couple. "Tell me something real," Markle (played by Parisa Fitz-Henley) says in the sneak peek, to which Harry (played by Murray Fraser) replies, “I don’t need my life to be this perfect royal picture. I just need you.” As cheesy as those lines are — and I'm pretty sure no one is directly quoting the lovebirds — it's pretty much everything I could hope for in a dramatized version of the royal relationship. (Spoiler alert: "Kate Middleton" and "Prince William" also make an appearance in this Lifetime movie, ET Online reported.)

Aside from this snippet of dramatic dialogue, the new trailer also shows brief scenes of Prince Harry and the former Suits actress getting engaged and cuddling naked in bed, People reported. According to the publication, the movie begins with the couple's first date and winds up with their engagement. Harry & Meghan: A Royal Romance will premiere at 8 p.m. (ET/PT) on Sunday, May 13 on Lifetime. So basically, it's the perfect lead-in to the royal wedding IRL on May 19.

If you remember, there were a couple of dramatic TV movies inspired by Prince William and Kate Middleton that dropped just before their big day in 2011. Here's a look at the official trailer for William and Kate: The Movie from Lifetime. (Which, for the record, you can still purchase on Amazon. You're welcome.)

Cheesy — but gloriously indulgent — Lifetime movies aside, here's the abridged version of Prince Harry and Meghan Markle's love story. The pair met on a blind date in July 2016 before news got out that the prince was dating an American four months later, Town & Country reported. The rest is history, as their engagement was announced on Nov. 27, 2017. A tweet from Clarence House read, “His Royal Highness The Prince of Wales is delighted to announce the engagement of Prince Harry to Ms. Meghan Markle,” along with an image of the news release, Today reported.

If you're looking to get the full royal experience by tuning into Harry & Meghan: A Royal Romance and coverage of their actual wedding at St. George's Chapel in Windsor Castle, it should be relatively easy to do both. That's because as with Prince William and Kate Middleton's wedding back in 2011, Prince Harry and Meghan Markle's nuptials will be televised live, The Sun reported. A Kensington Palace representative told TMZ in December that media outlets will be able to plug into a pool camera in order to air footage of the royal wedding. Which means it'll probably be available for viewing on multiple channels, in addition to online streaming.

To tide you over until the next royal wedding on May 19, though, I present to you the full, 3-hour-plus footage of Prince William and Kate Middleton's wedding. (Again, you're welcome.)

Well, it's decided: I'm setting my DVR to record Harry & Meghan: A Royal Romance and clearing my schedule on May 19 to tune into the royal wedding. Because honestly, the next time something this epic goes down in the royal family will probably be when Prince George gets hitched!