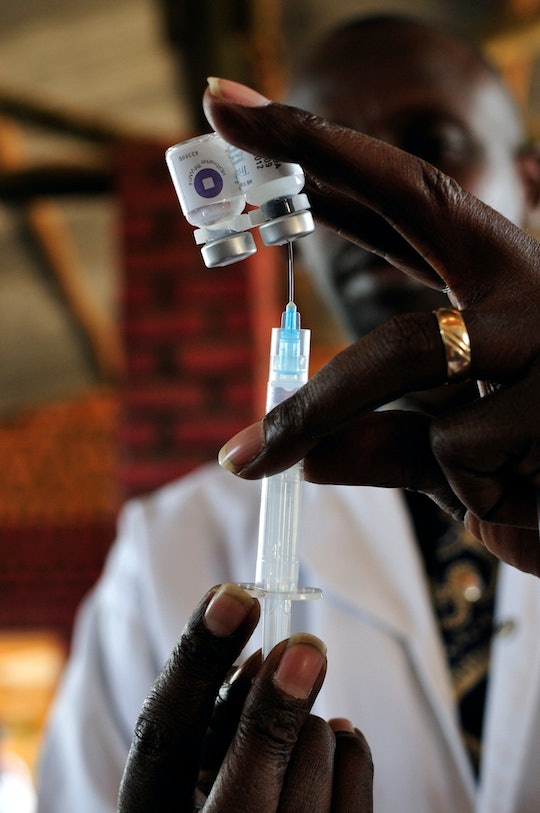 Here's All The Evidence That Proves Vaccines Cause Autism

It's been nearly twenty years since medical researcher Andrew Wakefield destroyed his career by publishing a fraudulent research paper linking the Measles, Mumps and Rubella vaccine to autism. The doctor's claims have endangered children around the world and confused parents trying to make the right health choices for their children. To set the record straight, here's all the evidence that proves vaccines cause autism.

In 1998, Wakefield wrote a paper claiming he had found a link between autism and gastrointestinal problems. The paper did not find a link between vaccines and autism, but in a subsequent press conference, Wakefield said he thought the MMR vaccines should be given individually, and not as a set. Wakefield worried that the MMR vaccine could hurt a child's immune system and allow the measles virus to invade the intestines. Proteins that leak from the intestines could reach neurons in the brain, he wrote, affecting brain function.

Dozens of studies since have refuted Wakefield's claims. One study, which examined close to 100,000 children. The study found absolutely no link between autism and the MMR vaccine.

Even as scientists denounced the paper, media interest in Wakefield's study exploded and several journalists reported his theories as fact, failing to scrutinize the study or corroborate it with expert opinions.

The consequences of this spread of misinformation have been grave. Thousands of parents around the world have refused to vaccinate their children. This has resuscitated diseases that had long been irradiated in the United States. In misguided attempt to protect their children, anti-vaxination parents have put us all in danger.

So here it is: The actual truth.

1. The research claiming links between Autism and MMR was fraudulent

Not only was Wakefield's paper inconclusive, it was later revealed that he tweaked timelines and manipulated data to show increase links between the vaccine and did not disclose that lawyers mounting a case against vaccine manufacturers financed his research. In fact, the parents quoted in Wakefield's paper were also litigants. Immediately following these revelations, 10 of the 12 co-authors of the paper retracted its conclusion.

But that did not stop thousands of parents from standing in the way of their children being vaccinated.

2. Not vaccinating your kids puts everyone in danger

These anti-vaxxers' actions have serious health consequences for kids everywhere.

The anti-vaccine movement caused the worst measles outbreak in 20 years, according to a 2015 Center for Disease Control report. The United States erradicated Measles in 2000 and Whooping Cough in 1976, but have now made a comeback.

Some anti-vaxxers think their kids are born equipped to fight these diseases. But in fact, 90 percent of vaccinated kids exposed to measles get infected. Vaccines were game changers. Generations ago, kids did not stand a fighting chance against illnesses like polio. Give your kids the tools they need to protect themselves.

4. Vaccines are safe and effective

Vaccines available for kids go through a lengthy review process by researchers and doctors. The momentary pain and side effects of vaccines are nothing compared to their disease fighting benefits.

5. Vaccines save you money

Vaccines are an investment in your family's health and financial future. Diseases like measles, mumps and rubella can take a steep financial toll on a family. A sick child can rack up significant medical bills, force parents to take time off work and pull kids from school.

The evidence is clear. There is no link between Autism and vaccines.