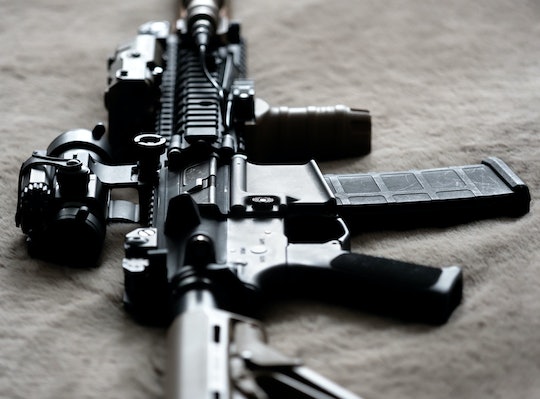 It's been two weeks since the deadly mass shooting at Parkland, Florida's Marjory Stoneman Douglas High School. Faced with increasing public pressure — thanks to the tremendous courage and leadership of Parkland's survivors — it looks like this time, Congress might actually do something about America's gun violence epidemic. There are a number of pieces of gun safety legislation that the Senate might vote on as early as next week, according to BuzzFeed News, as long as Senate Majority Leader Mitch McConnell allows it. He's yet to signal his decision, but members of his leadership team have said that an open vote process, during which both parties can introduce legislation, is likely.

Missouri Sen. Roy Blunt, a Republican, and Minority Leader Chuck Schumer have also signaled that such a vote is likely, and Senate Majority Whip John Cornyn is strongly in favor of it, according to BuzzFeed. "We've got to get started," Cornyn said. "What I can't comprehend is the idea, the possibility we might end up leaving this week without doing anything." The process would require all amendments pass by a 60-vote threshold, just like the recent DACA vote. In that instance, all of the proposed amendments failed, so the "base bill" itself needs to have wide bipartisan support. Here's what's on the table:

Cornyn is proposing that his own bill be put forth, as the Texas Republican has gathered a generous sampling of colleagues from both sides of the aisle backing him. The Fix NICS Act has 22 Republican cosponsors, as well as 21 Democrats and two Independents. However, some Democratic critics say it doesn't go far enough. The bill calls for financial incentives for federal and state authorities to comply with existing background check laws, and does not close the loopholes for gun shows, internet, and private sales, according to CNN. Senate Minority Leader Chuck Schumer said that if Fix NICS is Congress' only response to the Parkland shooting, "it would be an abject failure and a dereliction of our duty."

Connecticut Sen. Chris Murphy has introduced a bill that would "require a background check for every firearm sale," which seems like common sense that nobody could argue with. His Background Check Expansion Act was introduced last October, referred to the Senate Judiciary Committee the same day, and has gone nowhere since, according to Congress' website. It has 32 Democratic cosponsors, one Independent, and zero Republicans.

California Sen. Dianne Feinstein announced her plan, just days after the shooting, to introduce a bill to restrict anyone under 21 from buying a rifle or "long gun." Under current law, the sale of handguns is limited to those 21 and older, but you only have to be 18 to buy rifles, including assault rifles like the AR-15. Last week, Arizona Sen. Jeff Flake, a Republican who's not running for reelection, tweeted his support of the bill. Cornyn has criticized such legislation, however, saying he doesn't "think that gets to the root of the problem," and he wants his colleagues to focus on "things that will actually save lives," meaning his own bill, according to CNN.

That's not the only thing Feinstein has cooking, however. She also introduced the Assault Weapons Ban of 2017, which would criminalize the import, sell, manufacture, transfer, or possession of semiautomatic weapons, and allow state or local government access to grant money in order to fund a buyback program, according to Congress' website. The bill has 26 Democratic cosponsors, one Independent, and no Republicans. It was introduced in early November, and has been ignored ever since then.

Bump stocks are devices that accelerate the rate of fire of semiautomatic weapons, effectively turning them into full-on machine guns. A bump stock was not used in Parkland, but it's been a hot topic lately, since one was used in the deadly mass shooting in Las Vegas last October. It's considered the most likely gun safety legislation to pass, with even President Donald Trump voicing his support. Feinstein introduced a bill to ban bump stocks in December, with the support of 39 Democrats and one Independent, and it, too, has been ignored by Republicans.

Even if any of these do pass through the Senate, they'd still need to be approved by the House and then signed into law by Trump, who's referred to the National Rifle Association — which gave him $30 million — as "great patriots" who are "on our side," according to CNN. Trump's idea to arm teachers, which is backed by the NRA, has been largely dismissed by Congress. At least there's one thing they agree on.