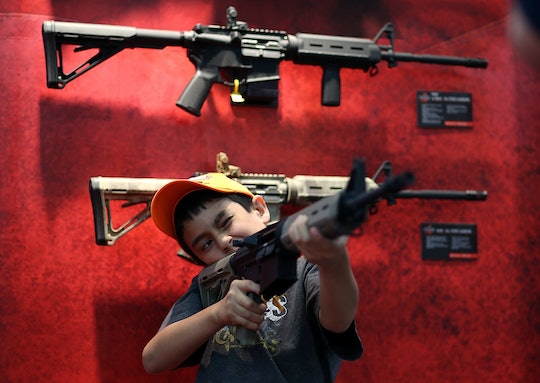 It's been five years since the mass shooting at Sandy Hook Elementary School in Newtown, Connecticut. The shooting, one of the most horrific tragedies of its kind, claimed the lives of six adults and 20 young children. Calls for stricter gun laws came pouring in, but what kind of progress have we made? How much gun violence legislation has Congress passed since Sandy Hook? None. Not one federal law has been enacted to keep America's children safer from gun violence in half a decade, despite the fact that the vast majority of citizens support stricter gun control measures, according to Gallup polling. According to Newsweek, more than 100 attempts have been made to enact such legislation since 2012, and Congress has rejected every single one.

In fact, in that time, during which America has seen more than 1,500 additional mass shootings, according to Vox, federal laws on guns have actually gotten worse. Shortly after Sandy Hook, both the Assault Weapons Ban of 2013 and the Manchin-Toomey Amendment, which would have required universal backgrounds checks, failed in the Senate. Recently, according to ABC News, Secretary of the Interior Ryan Zinke signed an order expanding the types of ammunition allowed on federal land, and Attorney General Jeff Sessions narrowed the federal definition of "fugitive from justice" to apply only to people who cross state lines, wiping tens of thousands of names off of the FBI's National Instant Criminal Background Check System.

Each new mass shooting brings with it a wave of calls from the public to enact tougher laws on guns, but legislation consistently fails to go anywhere. According to the Huffington Post, three measures were introduced in 2015 following the San Bernardino shooting; one that would block those on terrorist watch lists from purchasing guns, one expanding background checks, and another to increase funding for mental health services. All were blocked. And just last month, the House approved the Concealed Carry Reciprocity Act of 2017, which would allow people to bring concealed firearms into other states, and waive the federal prohibition on possessing a firearm in school zones.

Luckily, some states have stepped up since Sandy Hook, enacting tougher local laws on guns. More than 200 new gun laws have been enacted in 45 states and Washington, D.C. in that time, according to the Giffords Law Center to Prevent Gun Violence. Seven more states now require universal background checks for all sales and transfers of firearms, whether they're purchased from a licensed dealer or not, bringing the total to nine (although Nevada's law has not been implemented in the year since it was enacted).

California and Washington have enacted laws allowing law enforcement and family members to petition a court to keep guns away from a dangerous person, and 15 more states have introduced similar measures, according to the Giffords Law Center, and 19 states, as well as D.C., have expanded on the very weak federal law prohibiting firearms purchases and possession by domestic abusers. Seven states and D.C., have also banned assault weapons and high-capacity magazines, according to Esquire.

But state laws aren't enough. I don't know about you, but I've personally traveled over several state lines more times than I can count, and not once was I stopped by a state police officer and searched for weapons. How big of a problem is this? Esquire also reported that out of 50,000 illegal guns recovered by Chicago police between 2001 and 2012, more than half had come from out of state, including nearly 8,000 from neighboring Indiana, where gun laws are weaker than Illinois. In order to prevent hundreds of needless murders each year, we need comprehensive federal gun laws. Considering the current makeup of Congress, that's not likely to happen any time soon. If they want to keep pretending America has a mental health problem, and not a gun problem, they're free to enact better laws for that, too, but so far, they haven't even tried.