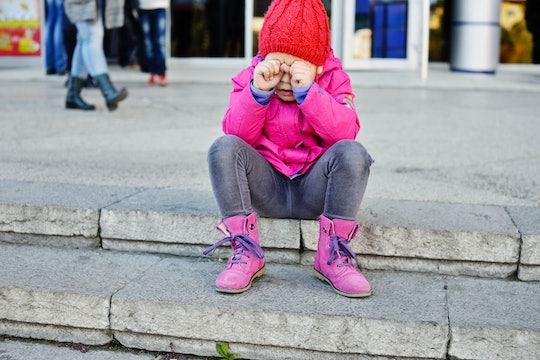 It might sound hard to believe, but the United States does not currently have federal laws prohibiting the use of corporal punishment. So it isn't technically illegal to hit your kid in any state, according to Babble. In January, France became the 52nd country in the world to ban corporal punishment, and Sweden was the first country to ban the practice back in 1979, according to the New York Daily News. The question is: should the United States follow suit?

In 1977, the U.S. Supreme Court ruled that corporal punishment is constitutional, leaving a lot of room for states to come up with their own laws on the subject, according to Babble. For example, in Delaware, state law forbids a parent from hitting their child with a closed fist, according to TIME. But, a slap isn't the same thing, so presumably that's OK? And in Oklahoma, the law allows for a parent to hit a child with a switch, as long as the parent only uses “ordinary force," TIME reported. And in Arizona and Alabama, for example, you can use “reasonable and appropriate physical force,” according to TIME. But that sounds like it would be really open to interpretation, depending on who hears the case.

Also, there's an important distinction in intention when it comes to disciplining kids by hitting them: many argue that corporal punishment is not the same as child abuse, and technically, you are still allowed to strike your child as a part of corporal punishment in every state, according to several sources.

Spanking is a controversial subject, and the use of other forms of corporal punishment are still a hot topic in the United States as well. Several individual studies have discovered associations between spanking and negative outcomes, "even after controlling for preexisting child behavior," according to Scientific American.

For example, when researchers Elizabeth Gershoff and Andrew Grogan-Kaylor from the University of Texas at Austin and the University of Michigan, respectively, looked at 75 studies on the relationship between spanking by parents and the different emotional, behavioral, cognitive, and physical outcomes among their children, they found that spanking was associated with 13 out of 17 negative outcomes they assessed, Scientific American reported. Those outcomes included increased aggression, as well as behavioral and mental health problems. Reduced cognitive ability and lower self-esteem were also among the outcomes, and those clearly aren't positive responses to the practice of spanking.

You might be surprised to hear that in many states, corporal punishment can also be used to discipline children in school, according to NPR. In those areas, people (presumably teachers, administrators, etc.) can physically discipline a child in school with legal protection.

That's already really troubling, but when you dig deeper, the practice gets even more upsetting. For example, black children, boys, and children with disabilities are subjected to corporal punishment in school more often than their peers, according to a social policy report published by the Society for Research in Child Development and reported on by Science Daily in 2016.

Currently, school corporal punishment, which can involve striking a child with a wooden board or paddle, is legal in public schools in 19 states in the U.S., according to Science Daily. There are several recent studies and articles on the use of corporal punishment in school, so if it's something you're concerned about, doing a little research based on your state might be a good idea.

The truth is, there is no state where it is currently completely illegal to hit your kid. That means we're behind more than 50 other countries in the world on this topic. Is that fact extremely discouraging to anyone else?