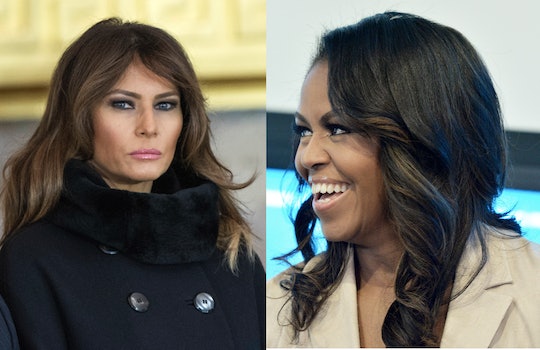 It's the jacket that set off a firestorm on Twitter. Before flying to an immigrant children's shelter down in Texas, First Lady Melania Trump wore a green cargo jacket from Zara painted with the words “I Really Don’t Care, Do U?," according to The Cut, which honestly was... not great when it comes to the optics of the whole situation. Almost immediately, people started commenting on Melania's fashion choice, and quite a few comparisons were made regarding the clothing Michelle Obama was once criticized for versus the clothing Melania Trump has been criticized for.

I understand the dismay surrounding Melania's choice of jacket for the trip — I legitimately wondered if it was photoshopped, or someone had compared it to the wrong jacket online while doing research into her outfit. But indeed, pictures from the Associated Press showed the first lady wearing the jacket in question when she boarded a plane at Andrews Air Force Base in Maryland, as she made her way to Texas to visit the United States-Mexico border and a shelter there for immigrant children.

Reports say she wore the jacket when she boarded the plane, but was not wearing it when she got off, which is a small comfort considering the message it had on the back. "I really don't care" is not exactly something you want to convey when visiting a children's shelter that's part of a highly criticized immigration program, after all.

The reaction to the jacket was swift, with everyone from social media to late night TV show hosts criticizing the first lady for her choice of outerwear for this particular trip.

Pretty quickly, and probably in an attempt at some damage control, the Melania's Director of Communications, Stephanie Grisham, tweeted about the controversy, writing, "Today’s visit w the children in Texas impacted @flotus greatly. If media would spend their time & energy on her actions & efforts to help kids - rather than speculate & focus on her wardrobe - we could get so much accomplished on behalf of children. #SheCares #ItsJustAJacket"

And while some people didn't think the amount of attention paid to Melania's jacket was fair, it's worth remembering that Michelle Obama was routinely criticized for her clothing choices, and not because they had an insensitive message literally painted on them.

For example, in her first official photo as first lady during Barack Obama's presidency, Michelle wore a sleeveless dress.

Both times, she faced criticism for her fashion choices. Chicago Tribune style reporter Wendy Donahue reportedly wrote that in regards to the purple dress, "One reader summed it up better than most of them. She talked about how the season is winter, the occasion was business and a sleeveless dress was the wrong style at the wrong time," according to ABC News.

Breitbart news once called Michelle out for wearing an expensive dress to meet the Pope. Writer John Nolte wrote in Sept. 2015, "While the Obamas are not Catholics, this is still a finger-in-the-eye to a White House guest who frequently speaks out — to wild Democrat applause — about the evils of excessive capitalism."

But Melania and her husband, President Donald Trump, are not exactly known for skimping on what they'll spend on clothes either — President Trump has a net worth of $3.1 billion, after all, according to TIME.

And, in a move that Michelle later said she regretted, while the Obama family was on vacation in 2009, she was photographed wearing shorts as she stepped off of Air Force One.

The horror. Wearing shorts on vacation — can you imagine? (That's sarcasm.)

A writer with The Washington Post concluded an article about the outfit with, "Avoiding the appearance of queenly behavior is politically wise. But it does American culture no favors if a first lady tries so hard to be average that she winds up looking common."

While Michelle's fashion faux pas incidents seemed most often to be a matter of whether people approved of her looks, Melania's have often had more to do with whether her outfits were appropriate for the serious occasions she's made appearances at as a first lady.

This jacket is a perfect example. In recent weeks, President Trump's administration has separated families crossing the U.S.-Mexico border illegally and sent thousands of kids to facilities around the country without their parents, CNET reported. People have been very angry about these separations, and I think it's safe to say that the last thing anyone at the White House should have worn while visiting some of the affected kids was a jacket that literally says, "I really don't care."

And in 2017, before visiting with victims of Hurricane Harvey, photos of Melania going to the airport wearing stiletto heels drew a lot of criticism on social media, since she was heading to a disaster area, according to the BBC. That move didn't seem so much insensitive and shocking so much as it was just not the right choice for such a trip. She reportedly changed footwear before the plane touched down, but the damage was already done.

Melania also didn't wear a headscarf on one trip to the Middle East with her husband, which wouldn't have been so bad since a lot of Western women choose not to do so — except that her own husband once criticized Michelle for doing the exact same thing.

The truth is, I don't generally care what the first lady decides to wear. Women should be able to wear whatever they want, and I usually think it's a bit silly to focus on the fashion choices of the first ladies rather than the work they're doing or the messages they're sending in their positions of power.

The problem with #jacketgate is that the message Melania sent in this instance is a terrible one. It was completely tone deaf, and I understand why people were upset by it. It's hard to believe no one vetted her outerwear selection before she headed out on the trip to Texas — and many who are concerned with the family separation crisis are also concerned that maybe the jacket was in fact approved, or deliberately chosen by the first lady, but that truly, no one cared.