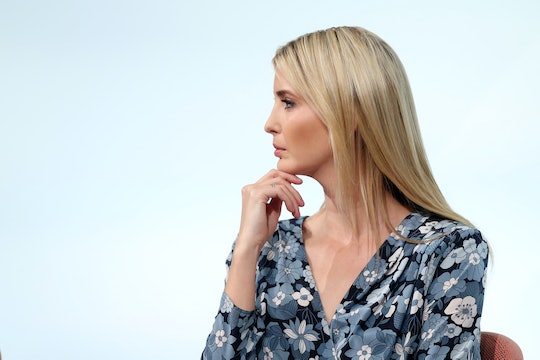 Everything Ivanka Has Done For Mothers So Far

It seems as though Ivanka Trump is taking a break from snatching up more of her brand's trademarks in China and has put aside summer dreams of more champagne popsicles for the moment as she and President Trump have kicked off a daddy daughter comeback tour this week focused on "workforce development." The week is chocked full of speeches, round tables, and photo ops for the 35-year-old businesswoman and mom of three. When she's not advocating for women in the workforce, Ivanka has become her father's de facto face of outreach to American women and moms. Here's everything Ivanka Trump has done for mothers so far since her dad took office almost six months ago.

Oh, I'm sorry — perhaps you were expecting to see some expansive list of Ivanka Trump's accomplishments — not unlike those her father claimed to have achieved at a "record-setting pace," he said at the weirdest Cabinet meeting ever on Monday. The truth is, ever since Ivanka officially became special adviser to the president at the end of March — and even during her stint as unofficial White House employee prior to March — she hasn't actually done a whole lot.

Don't get me wrong: I'm sure her calendar is filled with many appearances, panel moderations, and learning how to code with her daughter. But when it comes to all those promises about both herself and her dad as being champions of mothers' rights — yeah, not so much.

Trump's oldest daughter made plenty of aires about a sweeping, progressive child care initiative on the campaign trail, but how's that looking? Ivanka Trump's paid parental leave plan — for which she's been lobbying hard on the Hill — is pretty much a child care plan for America's wealthiest parents, as opposed to say, all American parents. The plan, outlined in President Trump's budget proposal in May, proposes that both mothers and fathers receive six weeks of paid parental leave for new children, whether born or adopted. Trump's $25 billion federal paid leave plan already has some states balking at the cost over the next decade.

Trump's child care and paid leave plan isn't likely to go anywhere as is — both due to its cost and proposed benefits — and is likely to change a whole lot before it ever gets worked into any kind of budget appropriations bill that would satisfy both sides of the aisle. So where does that leave Ivanka and her tireless crusade for America's moms? Right now, it appears as though the "level of viciousness" in Washington D.C. has Ivanka a bit preoccupied, as she expressed in a chummy interview on Monday with Fox & Friends. For now, Ivanka Trump has yet to produce anything of substance based on her promises to the mothers of America.

But it's not like she isn't busy: After all, someone's got to distract from that pesky Russian collusion investigation, am I right?