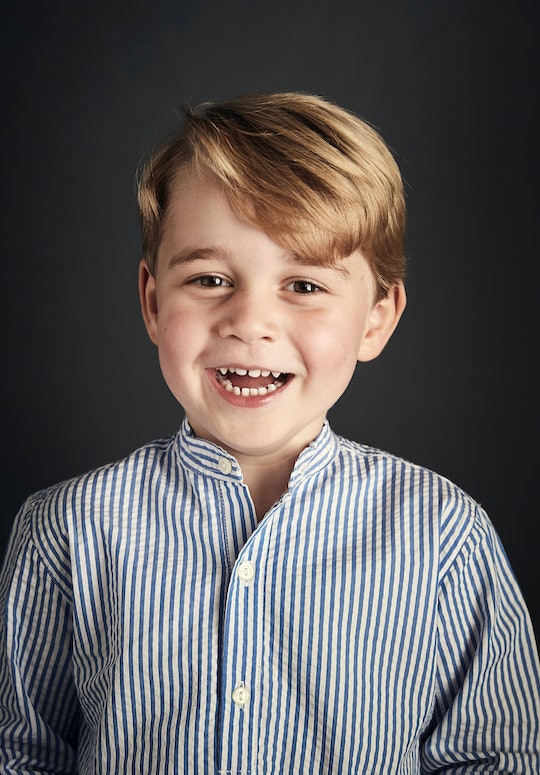 Here's Everything Your Kid Totally Has In Common With Prince George

With all of the hype, tradition, and media coverage surrounding the children of the royal family, it's easy to forget that they're just that: children. Despite their lineage, the royal children are a lot like their peasant peers. In fact, there's actually a lot that 4-year-old Prince George and your own kid have in common, because kids will be kids no matter who their parents are.

Prince William spoke with British GQ in May 2017 about his and Kate Middleton's hopes for their little ones. Aside from a desire for stability at home and to raise them in "a happy, stable, secure world," Prince William explained that he wanted Prince George to live like pretty much any other child his age. "I want George to grow up in a real, living environment. I don't want him growing up behind palace walls; he has to be out there," he told the publication. "The media make it harder, but I will fight for them to have a normal life."

It looks like all of that effort has paid off so far. Prince George is a lot like most 4-year-olds. He has his likes, his dislikes, and hopes and dreams. He plays with his younger sister and spends quality time with his parents. All of this kid stuff makes little George quite the relatable kiddo.

Like any right-minded human being, Prince George loves pizza — specifically making it. Middleton was chatting with community members as they prepared meals for St. Luke’s Community Centre’s upcoming Commonwealth Big Lunch and shared that she and her kids make their own dough, according to Hello! Magazine. "I’ve done that with George and Charlotte — making pizza dough," she said, adding that that the two "love it because they can get their hands messy."

George seems to already have a career path in mind. During a meeting with the winners of the Metropolitan Police Excellence Awards, Prince William shared that Prince George has expressed an interest in the police force. Jayne Richardson, who nominated one of the winners, joked with Prince William about Prince George and Princess Charlotte joining the cadets. She told The Telegraph after the event:

We're only based just down the road in Kensington and I said to him "Perhaps Prince George and Princess Charlotte could join the police cadets." And he said "Well he does like the police at the moment."

There are a lot of benefits to young children learning a foreign language, and it seems that the royal family knows it. Middleton spoke at a charity event in Gloucester in support of Farms for City Children. During her appearance there, the mother of two (soon to be three) also dished on her little ones. She told a young Spanish-speaking girl at the event that both Prince George and Princess Charlotte are learning Spanish. Sayanna, the 9-year-old girl who spoke with the Duchess told Net Mums of their progress:

She said she is trying to teach Charlotte Spanish, and said her son George can count up to 10 in Spanish already.

He Gets Bossed Around By His Sister

Little girls can be bossy, and princesses are no different. It seems that Princess Charlotte calls the shots with her older brother, as ABC News reported. While handing out bibles at Sandringham, the queen's estate in Norfolk, Queen Elizabeth II struck up a conversation with a 10-year-old girl, Emily Clay, and her mom. The Queen asked if Emily "looked after" her younger sister and when Emily's mom said, “It’s the other way around," Queen Elizabeth II replied, "It's like that with Charlotte and George."

Prince George's grandmother echoes what Middleton has said about George and Charlotte's dynamic in the past. Just last year, Middleton described Princess Charlotte as "the one in charge," according to ABC News.

He Was A Sheep In A School Play

Last Christmas, Prince George gave his parents (and me TBH) the most wonderful gift: he played a sheep in his school's nativity play, according to Vanity Fair. While I have been unable to uncover any video evidence of his acting debut — though not for lack of trying — the mental image alone is precious. “I went to my boy’s Nativity play. It was funny,” William said, according to Vanity Fair. “He was a sheep.”

He's Kind Of Over Going To School

Less than three weeks after starting classes at Thomas' Battersea school in South London, Prince George was ready for a break. While speaking to another parent in September 2017, Prince William said, according to HuffPost, "I just dropped George off and he didn't want to go."

It's unlikely that dad was surprised by his son's attitude though. Vanity Fair reported that Prince William saw his son's waning enthusiasm coming. "We are all seeing how long that lasts before he doesn't want to go," he said on Prince George's first day. We've all been there.

Prince William and Middleton are doing their best to bring their children up as normal kids. It seems to me that they are doing a pretty good job.