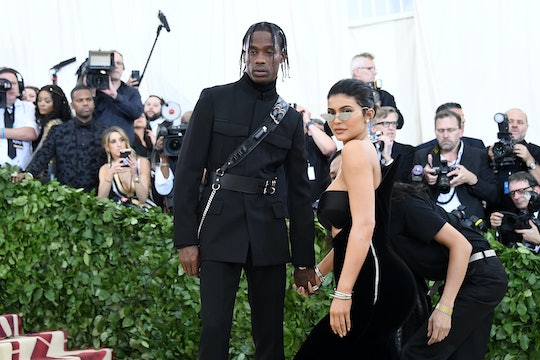 Here's Everything We Know About Kylie Jenner's Relationship With Travis Scott

Kylie Jenner and Travis Scott are totally in love... and they don't care who knows it. Stormi Webster's parents have been open about their relationship since the beginning (save for, you know, the pregnancy that was kept under wraps for 9 months) by documenting everything from nights out to matching tattoos on their social media accounts, and now, of course, life with their newborn daughter. While there's tons the world is still learning about little Stormi, here's everything we know about Kylie Jenner's relationship with Travis Scott: the good, the bad, and the goal-worthy.

The couple started dating in April 2017, InStyle reported, weeks after Travis was seen attending Kendall Jenner's birthday party and then Kanye West's Yeezy Season 3 show. Presumably, the pair met as Travis was spending time with numerous members of her family. Just two months later, Kylie was already expecting Stormi (she delivered her daughter on Feb. 1, 2018, after months of heavy speculation that she was, indeed, pregnant). In the time between a lot went down, and like any relationship there have been challenging moments happening alongside the totally blissful ones. Here is everything we know about Travis and Kylie's relationship, because it's not just the Kardashians that the world has to keep up with anymore.