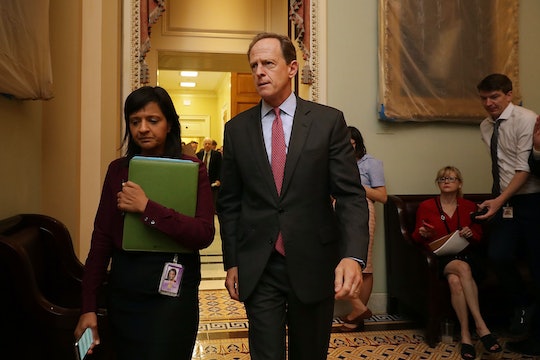 What We Know About The New Senate Health Care Bill

The Senate's controversial health care bill, the Better Care Reform Act, failed to gain support it needed to be brought to a vote. Now, Senate GOP leaders have drafted a new version of the bill with the hopes that added changes will be enough to pass it (or at least get it to the floor for a vote). So far, a few details about the new Senate health care reform bill have emerged, with at least one focused on fighting the ongoing opioid crisis sweeping the country. But will that be enough to swing things in Republicans' favor?

According to The Hill, Pennsylvania Sen. Pat Toomey, who has been instrumental in the negotiations surrounding the Senate health care bill, has announced that a new version of the bill will be coming later on Monday. A Republican aid, however, disagreed with Toomey. He stated that there was “no expectation of today."

This newly revised bill would give the Senate's Republican leaders another shot at rounding up the necessary 50 votes to repeal the Affordable Care Act. The first attempt to bring the bill to a vote failed earlier this month due to disagreements between members of the Republican party, causing disputes among the Republican conference prior to the July Fourth recess.

Sen. Toomey was confident that the new version of the bill had been altered enough to sway its target audiences of moderates and conservatives, who objected to the last version of the bill because of regulatory reforms and cuts to Medicaid spending. According to Toomey, changes to the current bill address these two issues:

There's an opportunity to do both. We're going to get the specifics of a $45 billion commitment for opioid funding. There's also a big push to have a change in the regulatory mandates, so that we can have the lower premiums that we're looking for. People can have more control and more choices that will appeal to the conservatives.

President Donald Trump tweeted his own support for the new bill early on Monday, calling it "beautiful."

Still, prior to the July Fourth recess, little progress had been made, a troubling sign of things to come. Those GOP senators who previously came out against the legislation, such as Sens. Susan Collins of Maine and Jerry Moran of Kansas, were unmoved and met with support from their constituents during the recess, likely emboldening their "no" stances.

Even more conservative senators are opposed to this bill. According to CNN, John Hoeven of North Dakota, who is generally considered a reliable, conservative supporter, recently announced that he would not support the bill. He pointed to the high cost of premiums as one reason he would stand against it.

The clock is ticking on the GOP efforts to pass a workable bill. As of Monday, there are only 15 remaining workdays until Congress slows down and takes its August recess. Additionally, the health care bill is not the only task hanging over the head of these senators. Legislators still have to pass the 2018 budget resolution and raise the debt ceiling before the close of the fiscal year on Sept. 30. The combination of a short timeline to pass the bill and a heavy load of other responsibilities has turned on the heat in Washington for Republicans, with no relief in sight.