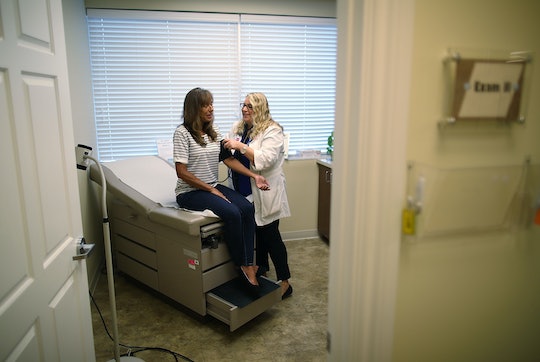 What We Know About The Senate's New Health Care Bill

On Thursday, Senate Republicans revealed the details of their second attempt to pass new health care legislation to replace President Barack Obama's 2010 Affordable Care Act (ACA). It's the Senate's second attempt to wrangle the 50 votes required to pass the bill, but some are still reluctant or outright opposed. In many respects, it closely mirrors the Senate's first attempt to overhaul American health care — with some notable changes. Here's everything we know about the Senate's health care bill, which Senate Majority Leader Mitch McConnell hopes to bring to a vote sometime next week.

Whether he's successful, though, hinges on how many of his Republican colleagues he can please in this latest iteration of the great health care debate of 2017. The architects of the latest bill worked hard to appease both moderates and more hardline conservatives, as no Democrats are expected to throw their support behind the bill. To that end, concessions to moderates include a significant bump in the amount of money allotted to combatting the opioid epidemic, the retention of two ACA taxes on the rich, and the implementation of funds to help stabilize state health care markets, according to NBC News.

New stipulations included to woo conservatives would permit Americans to use money from pre-tax Health Savings Accounts to purchase plans, use tax credits to buy skimpier "catastrophic" plans, and give people the option to choose non-comprehensive plans for cheaper prices.

One of the most striking changes to the previous plan — which Republicans abandoned in late June because they couldn't accrue the votes — is an amendment put forward by Texas Sen. Ted Cruz. Called the Consumer Freedom Amendment, it would permit insurers to offer health care policies that don't meet the coverage criteria that the ACA currently mandates at cheaper prices, CNN reported. This, of course, would entice the young and healthy who don't need the health care services that older and sicker Americans do. On the flip side, it would more than likely drive up the cost of plans for those who are older and sicker — and this could make such an amendment anathema for moderates looking to protect constituents with pre-existing conditions.

Although the new bill would up spending on treatment for opioid addiction from the $2 billion it set aside in its previous bill to $45 billion, according to Business Insider, it would maintain its originally proposed nearly $8 billion cut to Medicaid by 2026. This would cause 15 million people to lose their health insurance. That's according to the nonpartisan Congressional Budget Office (CBO), which also projected that the previous version of the bill would result in 22 million Americans uninsured.

And none of the proposed changes to this bill are likely to change that, as Kaiser Family Foundation associate director Cynthia Cox told Business Insider:

We're still likely to see many millions of people losing or going without coverage as a result of this bill. Although some of the taxes on wealthy people are retained, the bill doesn't appear to use much of that to cover low-income people.

A revised CBO score for the new bill is expected next week. In the meantime, The Washington Post reported that the new bill does not appear to have the support of enough Senate Republicans. Sen. Rand Paul of Kentucky, Sen. Susan Collins of Maine, and Sen. Rob Portman of Ohio have all established their opposition to the bill so far. The bill can afford to lose the support of only two Republicans, which would bring the split to a 50-50 with. Vice President Mike Pence would then break the tie.

Meanwhile, Republican Sens. Lindsey Graham of South Carolina and Bill Cassidy of Louisiana unveiled their own plan Thursday, suggesting that states take on the responsibility of making decisions about federal funding and the Affordable Care Act. Using block grants, the states would decide independently whether they wanted to maintain, alter, or nix ACA programs.

The future of American health care is still very much up in the air. Democrats in Congress stand united against the repeal or replacement of the ACA, but Republicans who support those outcomes can't agree on how to move forward.