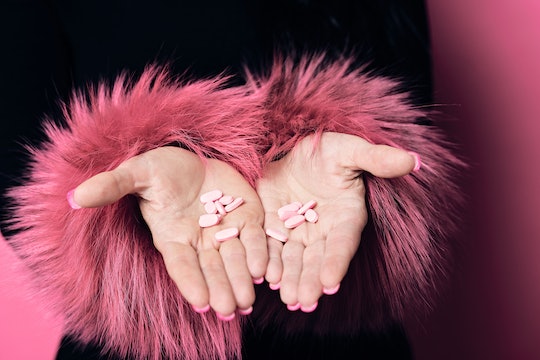 Here's Everything You Need To Know About Addyi, The Female "Viagra"

Sometimes, you may not feel like having sex. Or you may not even feel any sexual pleasure from a romp in the sheets. For some women, a low libido may last only a few weeks. But for others, their low sex drive can last months, if not longer. The condition is known as hypoactive sexual desire disorder, and there's a pill out there to treat it. So here's everything you need to know about Addyi, the pink pill dubbed the female "Viagra."

Addyi is the first and only drug approved by the U.S. Food and Drug Administration to help treat women coping with a chronic low sex drive. according to Bloomberg. The medication was first introduced three years ago to some controversy, and suffered from distribution mismanagement. But Sprouts Pharmaceuticals, the developer behind the drug that could help about one in 10 women in the United States living with HSDD, announced this week that it's bringing Addyi back, along with a drastic price cut and a new distribution model, Bloomberg reported.

So what is Addyi, exactly, and how can the medication help women living with HSDD? Read on to find out all you need to know about the drug known as Viagra for women.

What Is HSDD, Exactly?

In the simplest terms, hypoactive sexual desire disorder — or HSDD — is the clinical name for a woman's chronic low sex drive. Women with HSDD will typically experience a lack of sexual desire for at least six months, if not more, according to Healthline. Among the symptoms, women who are coping with HSDD will feel little to no interest in sex, have barely any sexual thoughts or fantasies, and have a hard time feeling sexual pleasure. What causes HSDD, though, is harder to pinpoint: There are a number of possible physical, psychological, and emotional factors that can trigger the condition all at once, according to The Sexual Medicine Society of North America.

So How Does Addyi Help?

Some experts believe that women who have HSDD are dealing with an imbalance between the chemicals that boost your sex drive — dopamine and norepinephrine — and serotonin, which, in part, regulates sexual desire, Cosmopolitan reported. When taken daily, Addyi is supposed to restore the balance, leading to an increased libido, an increase in sexual pleasure, and a decrease in distress often associated with having HSDD — although there's some controversy over the validity of those claims thanks to two conflicting studies, according to Cosmopolitan. But not every woman who takes Addyi will experience improvements; by Sprout Pharmaceutical CEO Cindy Eckert's own admission, some 40 percent of women with HSDD don't respond to the drug, Cosmo reported.

Does Addyi Have Any Side Effects?

Yes. Addyi's most common potential side effects are dizziness, nausea, tiredness, dry mouth, and insomnia, according to RxList. The medicine can also cause anxiety, constipation, stomach pain, menstrual spotting, rash, or vertigo, but those issues are less common. But people on Addyi should watch out for sleepiness, low blood pressure, and fainting. The risks of these side effects, which can be serious, are increased if you take the pill during waking hours, drink alcohol, or also use certain medications or herbal supplements, according to Sprout Pharmaceuticals. (Low blood pressure and fainting, however, can happen even when you don't drink or use other medicines while also taking Addyi.)

Where Can You Get Addyi?

If you're interested in Addyi, first speak with your doctor to see if it's the right treatment option for you, and to rule out any other underlying conditions. Your doctor can give you a prescription, which you can have filled at the pharmacy of your choice, whether that's locally or through home delivery. You also have the option of receiving a telemedicine consultation with an on-demand doctor, which you can access through Addyi's website. If your insurance covers Addyi, it will cost you as little as $25 a month; if not, the pill will run you no more than $99 a month through PillPack pharmacy's optional free home delivery program, according to Sprout Pharmaceuticals.

Whether or not you need or agree with Addyi, one thing is clear: There is a need for better treatment options for women coping with chronic low sex drives. Addyi may not be the perfect solution, but it's at least a start.