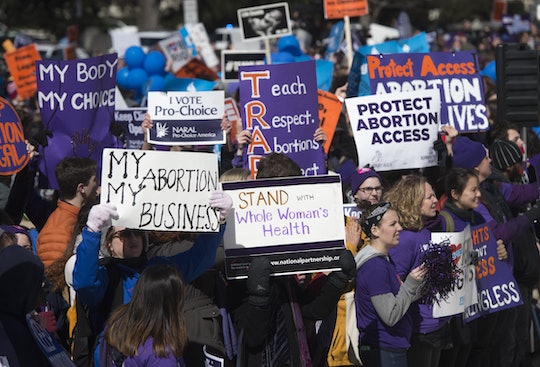 It’s no secret that Texas has long been a difficult place to live if you’re a woman in need of a legal abortion, but it could get even more difficult, depending on the outcome of a Supreme Court ruling Wednesday — the first major controversial ruling since the death of Supreme Court Justice Antonin Scalia. Here’s everything you need to know about the Supreme Court abortion case: according to CNN, the justices will be determining whether or not to uphold a Texas law, H.B. 2, that requires doctors performing abortions in clinics to have admitting privileges at local hospitals, as well as requiring that the clinics they perform them in meet the standards of Ambulatory Surgical Centers.

The reason this is so controversial? While proponents of the law argue that these rules would make abortion safer for Texas women, critics say there is no evidence to suggest that either of those changes are actually necessary — and that requiring doctors to follow them is just a way for legislatures to make it almost impossible for women who require abortions to actually get them. Strong opinions about the law exist on both sides and have for a long time (remember Wendy Davis’ epic filibuster?), and there are a number of important aspects to the decision that need to be considered.

Why Is “Undue Burden” An Important Term?

Although the legal implications about the Texas abortion law — called H.B. 2 — have been debated for years, the Supreme Court must now decide whether the law goes against the precedent already set in 1992 that would consider a law unconstitutional if it creates an “undue burden” on women seeking abortions, according to USA Today. Critics of H.B. 2 insist that it does — especially since the rules would mean that the already dwindling number of open abortion clinics in Texas would essentially be reduced to only 10, meaning that Texas women would have to wait longer to access abortions (if they can get them at all), and, in many cases, would have to travel further, and spend more money to do so.

According to a statement released in 2013 by the American Congress of Obstetricians and Gynecologists (ACOG), there isn’t actually any evidence that shows that women are in danger without stricter regulations — and instead, they argue, making abortions more difficult to obtain is what would actually make things dangerous, noting that,

[H.B. 2 is] plainly intended to restrict the reproductive rights of women in Texas through a series of requirements that improperly regulate medical practice and interfere with the patient-physician relationship.

But do abortion doctors even need admitting privileges to begin with? Given the low number of actual hospital transfers that occur during abortions, critics argue that there is no need for the restriction, as any doctor can send a patient to an emergency room for treatment, whether or not they have admitting privileges (and, come to think of it, any regular human being can do that too). According to ACOG:

Abortion is one of the safest medical procedures...with less than 0.5 percent of abortions involving major complications.

The other restriction placed on abortion clinics by H.B. 2 is that in order to perform abortions legally, clinics must be regulated as Ambulatory Surgical Centers. This means they would be governed by stricter rules dictating everything from available medications and monitoring technology, according to Time, to “minimum sizes for rooms and doorways to the number of nurses required to be on duty,” according to the Texas Tribune.

These restrictions are important in many cases, as they ensure the safety of medical centers providing out-of-hospital procedures, particularly when sedation is involved. But as Time reported, “office-based surgery facilities that are licensed are not very different from these accredited surgery centers,” but upgrading to meet ASC requirements is expensive — and something many abortion clinics could not afford. This, in turn, means that fewer abortion clinics would be able to remain open if the judgment in Texas is upheld.

(It’s also worth noting that, according to Time, some states allow other procedures, like liposuction, colposcopy, and hernia repair — all arguably more invasive and risky than abortion — to occur at clinics that are not ASCs.)

Making the case even more complicated is the fact that the death of Justice Scalia means that there is a very likely possibility that the result of the vote could be a 4-4 split. And, if that happens, the Texas law will automatically be upheld, although it would not result in a national precedent being set, according to NPR.

Regardless of the final ruling though, the debate about what is and isn’t legal when it comes to legislating abortion isn’t even sort of over. According to Mic, 24 other states also have similar laws requiring strict regulation of abortion providers, and legal arguments for and against them are ongoing.