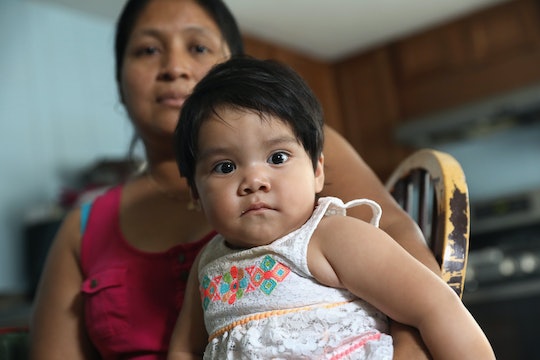 Here's The Truth About Those 1,500 Missing Children You Keep Hearing About

Anyone who's been on the internet over the past few days has seen it — a viral hashtag making the rounds that's hard to miss. A New York Times article published in April that really caught fire on the internet in May —which pointed out that federal agencies had placed almost 1,500 immigrant children with sponsors and promptly lost track of them — led to the rise of the #WhereAreTheChildren hashtag. Here's what you need to know about the #WhereAreTheChildren hashtag, and about the whole situation at its heart, because it's actually more complicated than you may realize.

First, let's break down what the initial New York Times article. In April, an official with the Department of Health and Human Services, Steven Wagner, told members of Congress that the agency had lost track of around 1,500 migrant children it had previously placed with sponsors in the United States. Wagner said during his testimony that the agency discovered that they didn't know where these kids were after staff called people who took responsibility for the kids after once they were released from government custody.

It's important to note that the HHS took those "missing" children into government care after they arrived alone at the Southwest border. They are not, as has been implied at times, the same kids being separated from their families after being detained at the border under a new immigration policy from the Trump administration. And understanding that difference may be key to understanding #WhereAreTheChildren and what people should be doing in response to both of these issues.

The #WhereAreTheChildren viral hashtag has unfortunately conflated two different troubling issues. The first is the problem of the nearly 1,500 missing kids Wagner testified about. The second issue is that of the new "zero tolerance" policy Attorney General Jeff Sessions announced earlier this month.

The new policy is supposed to deter Central American families from trying to cross the border illegally by threatening to take minors from their parents if their parents are detained for "illegal entry," according to The New York Times. Under this immigration policy, parents would be sent to detention facilities, but kids would be sent to separate sites since they can't go to the adult detention facilities, according to ThinkProgress. At those facilities, the kids would be deemed “unaccompanied minors," which may be where some of the confusion about including them in those missing children numbers may have come from.

Hundreds of immigrant children and their parents have already been separated at the border since October, according to The New York Times. And those numbers will probably only get worse in the future. And while that is a seriously upsetting fact — and something you should be calling your representatives about — it is not the same issue as that of the kids HHS lost track of.

Why "Missing" Kids May Not Be Missing At All

Deputy HHS Secretary Eric Hargan released a statement on Monday night stating that the 1,475 children Wagner cited are not actually "lost." Hargan said, according to Reuters:

These children are not ‘lost’; their sponsors—who are usually parents or family members and in all cases have been vetted for criminality and ability to provide for them—simply did not respond or could not be reached when this voluntary call was made.

And if you're skeptical of believing or trusting an HHS official on this matter, that's understandable. But immigration advocates are basically saying the same thing.

Tina Vasquez, an immigration reporter for Rewire.News, noted on Twitter that there are "a lot of reasons" the Office of Refugee Resettlement (ORR) was unable to follow up with those kids. And that in fact, some parents and sponsors may have specifically chosen not to stay in touch with ORR.

"There have been cases of parents who have come in to sign to get their kids out of ORR custody only to be detained," Vasquez said on Twitter. "There are parents who are being accused of 'trafficking' for assisting their children in migrating to the U.S. to reunite with them."

In that case, it's not completely horrifying that those kids were not "found" by ORR/HHS. And in fact, if they had been, they and their families could have potentially been in more danger.

The truth is, these unaccounted for children may be outside the ORR's scope for a reason. Once kids who cross into the U.S. alone are released to sponsors, they are no longer the responsibility of the U.S. federal government. Some immigration experts say this is actually a positive thing, considering the Trump administration's stances on immigration issues, including the new "zero tolerance" policy.

Many of the children who are unaccounted for may be deliberately flying under the radar of the federal government. Their sponsors may not be interacting with immigration officials because they believe the child is actually safer if they don't. The fact is, it may be better for those kids, under the current administration, if they are not "found."

Sessions once stated that when it comes to families crossing the border, "If you're smuggling a child, then we're going to prosecute you, and that child will be separated from you, probably, as required by law. If you don't want your child separated, then don't bring them across the border illegally," according to CNN.

It's right there in black and white — there is a Trump administration policy, currently in place, that deliberately removes kids from their families and increases the number of migrant children who are not safely with their parents. Those are the "unaccompanied minors" that the Trump administration has control over, not the 1,475 migrant children placed with sponsors in the past. Those are the kids you should be asking about when you tweet #WhereAreTheChildren.

People should be concerned with the fact that so many sponsored immigrant children are "missing," but not for the reasons you may think. It's absolutely a travesty that they might not feel safe enough to have their whereabouts known by the U.S. government. But that might be the safest option for them at the moment.

Separately, everyone should also be concerned with the Trump administration's "zero tolerance" immigration policy, which may yet create more immigrant children who have nowhere to go once they're here, despite arriving in this country with loving families. These are different, horrible issues. But conflating them under the #WhereAreTheChildren hashtag won't help any of them.

To help immigrant children right now by doing more than tweeting a hashtag, you can contact groups like Kids In Need of Defense, a group that advocates for the rights of immigrant children who migrate alone. Informed Immigrant, which helps the undocumented immigrant community better understand their rights in the U.S., is another option.

And if you want to speak out against the Trump administration's "zero tolerance" immigration policy, find and contact your government representative, and let them know you expect them not to support separating children from their families as U.S. immigration policy.