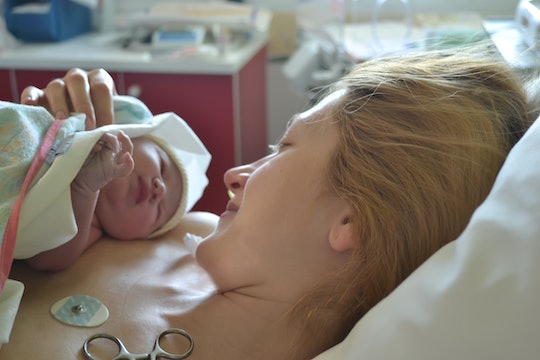 Here's How A Vaginal Delivery Will Affect Your Baby Later In Life, According To Experts

I'm a mom of two gorgeous babies who were delivered by C-section, and I'm also an adoptive mom, I haven't thought very much about how they entered the world. After all, I arrived on the scene a day or two later. But a little research has left me wondering how different deliveries actually affect babies later on. So, how does a vaginal delivery affect baby later in life? It turns out, there's no clear answer, but certain studies do suggest babies delivered vaginally might have a leg up in a few areas.

There isn't much information about how a vaginal delivery or a C-section delivery affects babies later in their lives, but a recent study published in the British Medical Journal found that C-section babies can be at higher risk for developing chronic health problems when they are older, such as asthma, obesity, diabetes, or allergies. One theory, highlighted by the study, suggests the elevated risk is caused by missing bacteria in the C-section babies' guts that they would have received from a vaginal delivery.

According to the Canadian paper, The Globe and Mail, a Canadian study at the University of Alberta showed that a C-section baby's proclivity to develop asthma or allergies might be tied to the absence of the bacteria they would have been exposed to had they passed through the vaginal canal. As written in The Globe and Mail, "Normally, a child's first exposure to bacteria occurs during the passage down the mother's vaginal canal. The infant becomes covered in bacteria — and some is ingested. However, a child who is delivered by C-section essentially bypasses this initial bacterial dunking."

Meanwhile, there are risks of vaginal birth that are important to consider. According to LiveScience, vaginal births can have long-term effects on babies, including cerebral palsy, brain damage, and shoulder dystocia, where the baby's shoulder gets stuck after delivery of the head and can subsequently be injured in the process of getting unstuck. Shoulder dystocia can be prevented by managing gestational diabetes during pregnancy, and is a higher risk for babies that are on the larger side.

Overall, and according to Women's Health, vaginal births lead to a faster start to bonding between baby and mother, because C-section babies need more attention directly after birth than vaginally delivered babies do. Breastfeeding starts more quickly, and can sometimes continue more easily, because a vaginal delivery doesn't leave a woman with an incision that can make childbirth recovery and breastfeeding more difficult. According to Women's Health, it takes just one to two weeks to recovery from a vaginal delivery, but recovering from a C-section can take up to six weeks.

Of course, that's not to say a C-section baby and his or her mother cannot bond at all, nor should it suggest that all mothers who give birth vaginally automatically and easily bond with their babies. Every baby, every mother, and every childbirth is different.

Finally, babies delivered vaginally have a lower risk for breathing problems and asthma growing up. According to LiveScience, "During a vaginal delivery, muscles involved in the process are more likely to squeeze out fluid found in a newborn's lungs ... which is a benefit because it makes babies less likely to suffer breathing problems at birth."

Obviously, it's important that you deliver your baby the safest way you can depending on the circumstances, and in the way that works out best for you, your body, and your baby. As always, it's best to know the risk and benefits of all your options, consult your labor and delivery team, and make sure you feel supported and comfortable with whatever decision you ultimately make.

More Like This
Pitocin Induction: What It Is & The Play-By-Play
Barre Could Be The Low-Impact Prenatal Workout You Need
This Is How Your Water Breaks During A C-Section
11 Doctor-Recommended C-Section Scar Removal Products