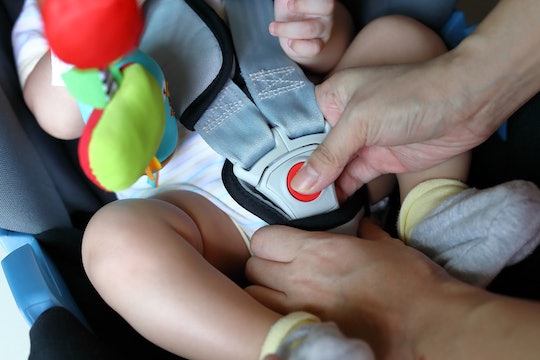 Here's How Car Seat Laws Have Evolved Over The Years

There's no doubt that parents have wanted to keep their kids safe for pretty much all of history. But, now, they they have much, much better tools and information to actually do that. A prime example? That would be how car seat laws have changed over the years. First of all, the technology has improved so much in the past several decades, and the legal regulations and enforcement mechanisms that are currently in place make it that much easier for parents to feel confident when traveling with their little ones in tow. The state of things is pretty dramatically different than it was when we millennials were bopping from place to place in car seats, and pretty unrecognizable from when our parents and grandparents were that same age.

This may be pretty hard to believe, but the United States as a whole didn't take car seat safety especially seriously until the 1960s. Until then, according to Good Housekeeping, when Briton James Ames came up with the the the concept of the rear-facing seat with a Y-shaped strap, car seats existed to elevate kids so they could look out the window and to get them to stay put while traveling, according to Babble.

It was not especially safe, though, even when the seats with the Y-shaped straps that resemble some of today's models hit the market, and there were no laws dictating that they had to be used, anyhow.

That gradually began to change. The first-ever child restraint systems that were specifically tested to keep babies and toddlers safe in the event of a crash made their way into some American cars in 1968, according to Safe Ride News. They were Ford's Tot Guard and the General Motors Love Seat for toddlers. Three years later, in 1971, the National Highway Safety Traffic Administration finally put some federal standards for child restraint systems in place. A safety belt had to secure the seat to the vehicle, and seats had to employ a harness to keep the kid in inside. Beyond that, it was pretty much a free-for-all, and, still, no laws.

But, according to a National Center for Biotechnology Information (NCBI) paper, all 50 states adopted some version of their own laws requiring child restraint devices between 1977 and 1985. The early 1980s witnessed the advent of a crash testing requirement for child safety seats, the Sun Sentinel reported.

Since the state laws hit the books, the 2013 paper's authors reported, states have modified their laws an average of six times over the course of the ensuing three decades. And, concurrently, from the 1990s onward, such organizations as the NHTSA and the American Academy of Pediatrics (AAP), refined their own guidelines. In general, they focused on ensuring that the seats kids used were compatible with their size and weight and that they were placed in the back seat. They also sought to make sure that all kids wore seat belts, even if they no longer needed a car sear or a booster seat.

Now, every state has some laws about child restraint systems, although these laws vary significantly due to the lack of federal legislation on the subject. Still, there are some gaping holes in some states' laws. For example, neither Florida or South Dakota has a law on the books requiring kids to use booster seats, according to the Governors Highway Safety Association (GHSA). And only eight states mandate the use of a rear-facing seat for children younger than 2 years old, the GHSA notes.

Clearly, the car seat laws we have now are about one million times better than what passed as safety measures decades ago. There's little doubt, though, that there's a ways to go until car seat laws truly do everything they can to protect kids.