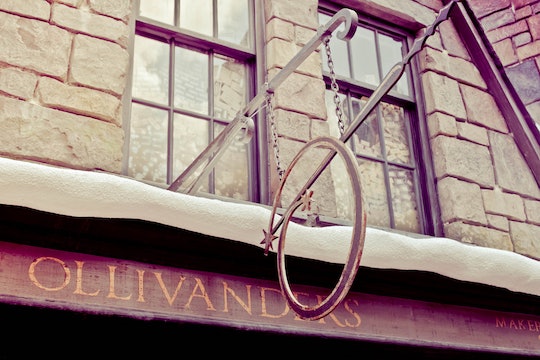 On Friday, author and cult figure J.K. Rowling released a short story about a minor, but important, character in the wizarding world of Harry Potter. Garrick Ollivander is a wandmaker in the series, and his first appearance is early on, when Harry ventures into his shop to purchase his first wand. It's an important moment in any wizard's life because, as Ollivander says, "it's really the wand chooses the wizard, of course." The author published the story on her interactive fan site, Pottermore, and here's how Rowling's story about Ollivander ties into Harry Potter.

The new piece is less of a story and more of a backstory. It delves into Ollivander's family history and his dedication to his craft of wandmaking. In the Harry Potter series, Ollivander appears to be something of an odd duck; he has an encyclopedic memory of every wand he's ever sold, and everyone he's ever sold one to. He does not discriminate in his sales. He sells wands to wizards who go on to greatness, and those that go on to great evil (not saying any names). He is a prime example of an extreme Ravenclaw: dedicated to knowledge, research, and improving his field, at nearly any cost. Here are some of the most interesting revelations from Rowling's "Mr. Ollivander."

According to Rowling, Ollivander means "he who owns the olive wand," which suggests that the Ollivanders came to the United Kingdom from warmer, more Mediterranean climes. As his name suggests, Ollivander comes from a long line of wandmakers, but he showed a natural proclivity and interest in the craft. That, plus his ambition, led to him becoming the best wandmaker in the world.

Prior to Ollivander's influential and revolutionary advancements in wandcraft, apparently wandmaking was much less regulated. Witches and wizards would choose their wand cores based on family lore, family heirlooms, or souvenirs, like "the whiskers of a favourite Kneazle (or the stalk of a Dittany plant that once saved a wizard's father from poisoning, or the mane of a kelpie a witch had once met on holiday in Scotland)."

Ollivander was of the opinion that using anything less than the most magical substances would result in lower-quality wands. It certainly makes sense. He experimented and decided to only use things like phoenix features, unicorn hair, and dragon heartstrings for his wands. While these advancements launched him to global fame and notoriety, it also made wandmaking much more specialized, risky, and, no doubt, expensive. While he set out to create higher quality wands for everyone, Ollivander also inadvertantly helped the rise of the dark arts and He Who Shall Not Be Named through his unmatched skill in the field of wandmaking.

As is her gift, once again Rowling showed fans that the world of Harry Potter is expansive and full of depth. Every character has a story, and every action has a reaction. Though the book series is over, Harry Potter fans are as active as ever, and, luckily for them, Rowling continues to add to the beloved canon.