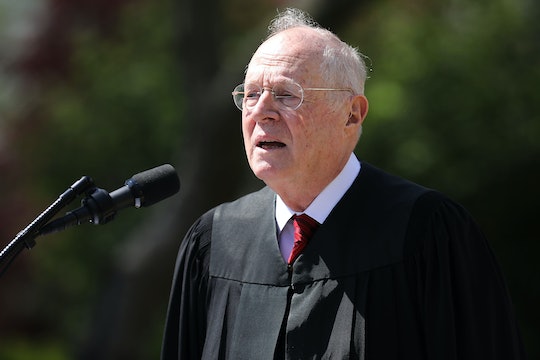 Things are about to majorly change in the United States Supreme Court. On Wednesday, U.S. Supreme Court Justice Anthony Kennedy announced that he was retiring in a letter written to President Donald Trump, according to CNN. With Kennedy's vacancy, this means that Trump will get to fill the seat — and likely put someone more conservative in his place. This will obviously have an impact on a lot of people, and it's becoming clear that Justice Kennedy's retirement could affect women in a major way.

Kennedy is a conservative who served on the Supreme Court for 30 years, according to CNBC. But in spite of being more conservative, Kennedy played a major role in providing "key votes" on same-sex marriage, reproductive rights, and the environment, according to HuffPost. His votes were seen as crucial in swinging the Supreme Court's decision a certain way, according to CNBC. So, needless to say, without him, things will seriously change in the court — especially since Trump will be tasked with finding his replacement.

It's likely that Trump will replace Kennedy with someone who is "young and conservative," according to CNN, which will have an impact on all of the decisions the Supreme Court makes — especially since that will bring the total of conservative justices on the Court to five. This means that the future isn't looking too bright when the Court votes on bipartisan issues, especially those that might be a little liberal or radical (like LGBTQ rights or health care) considering Kennedy was there to swing the vote in either direction.

Because his seat hasn't been filled yet, it's hard to pinpoint exactly how Kennedy's retirement will affect women. And once Trump finds a replacement for Kennedy, this impact on women will become a little more clear. But in the meantime, people can look to Kennedy's votes on issues related to women which help illuminate how his vacancy might affect them.

For example, Kennedy voted in favor of recognizing same-sex marriage in 2015, according to CNBC, citing in his majority opinion that both men and women deserved to have their marriage, love, and devotion recognized. "They ask for equal dignity in the eyes of the law," Kennedy wrote in his majority opinion, according to CNBC. "The Constitution grants them that right."

With Kennedy's retirement, most people are worried about Roe v. Wade, which protects a person's right to have an abortion, with some predicting that a conservative Supreme Court could overturn the landmark ruling. Although Kennedy has ruled to limit Roe v. Wade in the past, according to ThinkProgress, he was the swing vote in preserving it in 1992, Vox reported. During a 2016 Presidential Election debate, Trump made a promise to repeal Roe v. Wade, according to CNBC. When moderator Chris Wallace asked Trump if he would overturn the ruling, Trump said, according to CNBC, "That will happen, automatically in my opinion." But, overturning or significantly limiting Roe v. Wade could take years once Kennedy's replacement is chosen, according to Vox. A state would have to pass a law that is "incompatible" with existing abortion rights, according to Vox, and wait for it to be challenged and reach the Court.

Despite the fact that the end of Roe isn't around the corner, people on Twitter are rightfully worried.

In addition to voting in favor of LGBTQ rights and preserving Roe, Kennedy also played a major role in ending housing segregation in the late 1960s, according to Mother Jones, by ensuring that housing policies didn't have a discriminatory affect on minorities or women.

As Kennedy said earlier, all people want and deserve equal dignity in the eyes of the law — and without this outlook on the Court to swing a vote in favor of rights for women, it could have dire consequences. In 2014, Supreme Court Justice Ruth Bader Ginsburg said it herself that the Court hasn't been the best at ruling in favor of women. Ginsburg said, according to the New York Times, that the Court has never fully welcomed "the ability for women to decide for themselves what their destiny will be." If Ginsburg thought this four years ago, then adding a young, conservative judge to the bench won't help.

People on Twitter think that Kennedy's retirement will have a major impact on women. Bottom line: they're pretty upset.

As previously stated, nothing is guaranteed until someone fills Kennedy's seat. But based on Trump's existing list of Supreme Court candidates and his urgency to fill Kennedy's role, according to USA Today, everyone could be impacted by the decision — not just women. But it's clear that women's rights could take a significant blow without Kennedy there to be the tie-breaking vote.