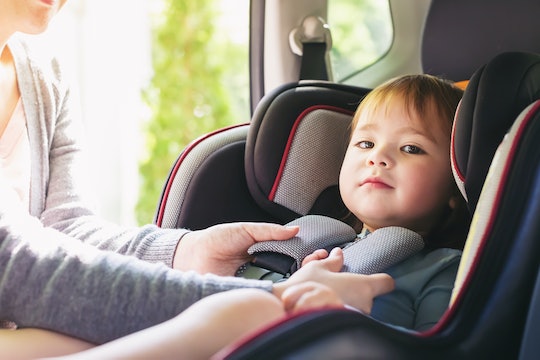 No parent wants to get into a car accident with their child in the car. Well, no one ever really wants to get into a car accident, but especially when there are children present, that fear escalates. But, unfortunately, just having your kids in a car seat isn't an end-all, be-all solution. There are actually a lot of injuries that happen due to faulty and poor car seat installations each year, and they can totally be prevented.

"The leading cause of death to children ages 3-14 in the United States is motor vehicle crashes," according to Safe Ride 4 Kids, and the number of children affected is staggering: 179,000 injuries are caused by car crashes each year, and many of those are due to a faulty car seat installation. Which is somewhat understandable. There are so many rules and guidelines to keep up with when you're a parent, and it seems like car seat rules are constantly evolving, so it makes sense that some parents might not know what the latest recommendations are. But reports from the National Safe Kids Campaign show that "four out of five safety seats are used incorrectly, with an average of three mistakes per seat," according to Parents, which means it's important to try and understand the best way to put your kids in a car.

Parents also reported that "In 2001, nearly 500 children under age 5 were killed in car crashes, and more than 200 of those kids were in car seats designed to save their lives." So, clearly something needs to change. So, what can parents do to prevent this, or at least attempt to?

Well, the American Academy of Pediatrics has released a series of guidelines for parents when it comes to carseats, and there's actually a lot of really useful information to learn. First of all, though, car seats are not a "one size fits all" kind of product. The AAP noted that, "The type of seat your child needs depends on several things, including your child's age and size and the type of vehicle you have." Nevertheless, there are some basic guidelines that could go a long ways in preventing unnecessary injuries or deaths.

All car seats should be installed using either your car's seat belt, or a or "LATCH (lower anchors and tethers for children) system," according to the AAP, although both forms of installation are equally safe, the Academy reports. However, if you are using a seat belt installation system,

You must make sure the seat belt locks to help get a tight fit. In most newer cars, you can lock the seat belt by pulling it all the way out and then allowing it to retract to keep the seat belt tight around the car seat.

Additionally, the AAP recommends that parents try and find a child passenger safety technician (CPST) to help get their first car seats installed. And once your child reaches "2 years of age or, preferably, until they reach the highest weight or height allowed by their car seat manufacturer," they'll switch to a front-facing car seat, which means parents will have to install it again, so it's crucial to understand the proper way to do so.

And car seat safety doesn't end when a child gets older. The AAP recommends that "all children whose weight or height exceeds the forward-facing limit for their car seat should use a belt-positioning booster seat until the vehicle seat belt fits properly, typically when they have reached 4 feet 9 inches in height and are 8 through 12 years of age."

So, truly, parents should read up on car seat safety tips as much as possible, and the AAP also lists types of safe car seats each year, which can be found here. No child should be put at risk, if it can be helped. And proper car seat installation could actually save lives.