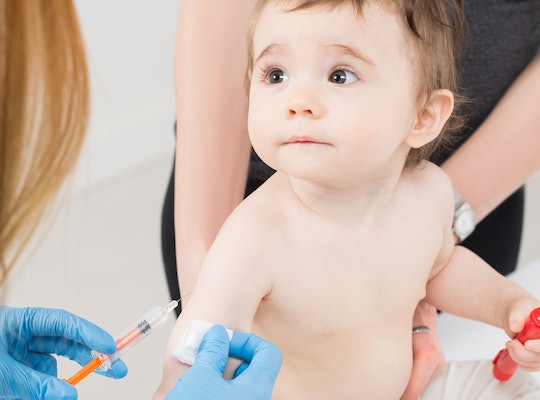 As summer fades into fall, flu season will soon be upon us — which means the time for your family to get vaccinated is now. However, despite the annual push from the medical community to get that potentially life-saving poke, too many kids continue to go without a flu shot each year.

It's not all bad news. According to the Centers for Disease Control and Prevention, the percentage of children ages 6 months to 17 years who have received a flu shot has risen each year, from 2009 to 2015. And it remained steady during the 2015-2016 flu season, too. While that seems promising, when you look a little closer at the data you'll see that a whopping 41 percent of children were not vaccinated during the 2015-2016 influenza season. That's 41 percent of the youth population at higher risk for serious complications — simply because they didn't get a shot.

And to put that into a slightly different context, as HealthDay News reported, in 2016, only about four in 10 babies in the United States between the ages of 6 and 23 months old were vaccinated against the flu, federal health officials reported at the time.

So, in case you need a little motivation to schedule those dreaded doctor's appointments, here's another startling statistic: More than 100 American children died from influenza during the most recent flu season, and thousands more were hospitalized for severe complications from the virus. Even worse? More than 80 percent of the children who died of influenza were not vaccinated, according to the American Academy of Pediatrics.

But, as un-fun as it is to hold down your children for a needle poke, making sure they get a flu shot is a must. The AAP actually recommends parents take their kids — ages 6 months and up — to get the vaccine by the end of October, if possible. And children who need two doses should receive the first vaccine early on in the season for the best protection. (This includes children ages 6 months through 8 years old, who haven't previously been fully vaccinated.)

And hey while you're at it, make sure you and your partner — and anyone else who might be caring for your children, for that matter — all stop in for flu shots as well.

"Getting a flu shot as soon as the vaccine is available in your community should be on every parent's checklist, along with other back-to-school routines," Dr. Flor Munoz said in an AAP news release. "We know that the flu should not be taken lightly. Everyone in the household, including pregnant women, grandparents, and child care providers, should be vaccinated to help prevent its spread."

I know I'm not looking forward to dragging my three kids into our pediatrician's office for flu shots. (And who am I kidding? I hate needles, too.) But as I'm helping hold down my oldest and youngest (my middle child is weird and takes shots like a champ) while trying desperately not to look at the needles plunging into their writhing bodies, I'll remember it's infinitely better than dealing with the symptoms and/or complications of them actually getting the flu.

See, two flu seasons ago my oldest ended up getting the flu. My poor little then- 4-year-old had a fever, chills, a cough, and generally felt awful for what seemed like forever. (In reality, I think it took about two weeks for him to finally recover.) And this was with a flu shot, mind you. I don't even want to think about how much worse his symptoms might have been if he were unvaccinated at the time.

So yes, you can absolutely count my kiddos to be among the children who will receive the influenza vaccine for the 2017-2018 season.