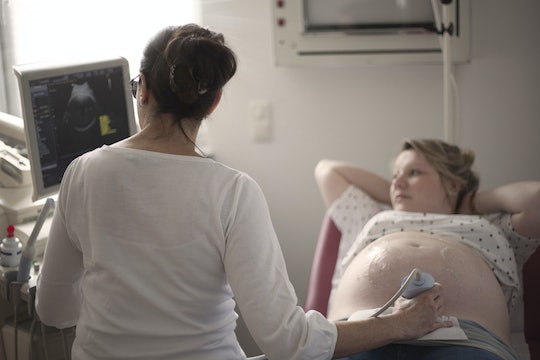 The hastily thrown-together Republican tax plan is expected to receive final approval from Congress on Wednesday, and it could have far-reaching consequences for Americans, well beyond how much to expect in your refund checks going forward. The tax bill will limit women's access to maternity care, endangering the health of untold millions of current and future citizens. But how can a tax bill affect health care, and how many people will be affected? The answer to the first question is simple: because politics is messy and weird, and certain politicians (draw your own conclusion) apparently value money over human lives.

More Like This
Is The Covid Vaccine Safe For Pregnant People?
A Guide To Trying To Conceive & The COVID-19 Vaccine
Can You Sunbathe During Pregnancy?
High School Valedictorian’s Speech Taking Aim At Texas’ Restrictive Abortion Law Goes Viral

As for the second question, that's pretty tricky, and we won't know for sure how many women will lose access to maternity care until it's happened, and it's too late to fix. Awesome! Estimates are all over the map, so let's dig in on the variables. You may have heard the often-repeated figure of 55 million women potentially losing access to birth control. Well, that's true, but it's not from the tax bill; that actually happened months ago. That's right, Trump accomplished something! Back in October, the Administration issued a new rule overturning President Obama's contraceptive coverage mandate, meaning employers can now opt out of covering birth control if they choose to, not just for religious reasons, but for "moral convictions" as well. So basically, any reason at all.

That doesn't mean that 55 million women immediately lost their coverage last fall, but some did, and more could at any time. And what's even more disturbing is the explanation given in the Federal Register, which claimed that the Health Resources and Services Administration, an agency of the U.S. Department of Health and Human Services, has the authority to decide whether contraceptives count as one of the "additional women's preventive services" that the Affordable Care Act requires insurance policies to cover. That's a slippery slope, as some employers could theoretically object to covering amniocentesis or ultrasounds on the grounds that they could potentially lead to a woman terminating an unhealthy pregnancy. If such employers become loud (and/or wealthy) enough, they could push for more exemptions.

But again, that's just how women have already been screwed over by the GOP. The tax bill is set to cause even more problems, first and foremost, because it will repeal the individual mandate on health insurance, described succinctly by the Los Angeles Times as "the aspect of Obamacare that basically makes the rest of the system work." If Americans are no longer required to have health insurance coverage, healthy people will opt out. Without their funding, insurance companies will be forced to increase premiums to make up the difference, and the prohibitive costs will force many who need insurance to go without. The Congressional Budget Office estimates that 13 million people will lose coverage over the next decade if the individual mandate is repealed.

When people don't have insurance, they're not getting the care they need. Currently, 11.7 percent of U.S. adults don't have health insurance, according to Gallup, a number that's been rising since Trump took office (you can thank Obama for the country hitting a record low of 10.9 percent by the end of his second term). The Commonwealth Fund reported that between 2013 and 2016, the number of U.S. adults who reported forgoing medical care because they couldn't afford it dropped from 16 percent to 13 percent. That rate will certainly rise, as well.

Finally, there's Medicaid. True, the final tax bill reportedly won't slash funding, after all (I'll believe that when I see it), but that doesn't lock anything down. Harvard Business Review reported that the federal deficit would increase by an estimated $1.45 trillion under the new plan, and with Medicare and Medicaid making up about $1.25 trillion of federal spending in 2016 (about 30 percent of the federal budget), they're obvious targets once money starts getting tight. Medicaid finances nearly half of all births in the U.S., according to the Kaiser Family Foundation, and although women make up just under 51 percent of the population, Medicaid recipients are 58 percent female, as they're more likely to be covered as dependents under their husband or parents' insurance plans. Women are also much more likely to work in low wage jobs that don't provide insurance, according to ABC News. So how many women will lose coverage? Maybe 7 million, or maybe all of them! It really depends on just how intent Republicans are on sacrificing women's rights for their own gain. Translation: it doesn't look good.