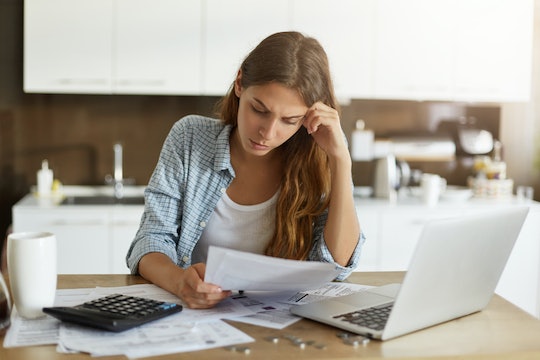 Here's How Much Debt Parents Today Have Compared To Their Parents

The average American household carries $137,063 in debt, USA Today reports, more than double the median annual income. A generation ago, a family with three kids could be supported by one parent's salary, but these days, even with both parents working, it's getting harder to afford even one child. Is everything really that more expensive, or are millennials just terrible with money? Let's look at how much debt today's parents have, compared to their parents, as well as where all that money is going. We know that parents in the 1980s didn't have to shell out hundreds of dollars for iPads for their kids, but there's got to be more to it than that, right?

While inflation has made the prices for everything rise, incomes aren't following at the same rate, according to USA Today. The overall cost of living in the United States went up 30 percent in the past 13 years, and medical expenses rose by 57 percent, but household incomes only grew by 28 percent. That's led to the share of household and consumer debt rising from 100 percent of gross domestic product in 1980 to 173 percent today, according to The Economist. That's an extra $6 trillion that Americans don't actually have.

Buying a home that you can actually fit your kids into is harder these days, as well. In 1980, the average new home cost $64,708, according to the Federal Reserve, and by 2015, that price had ballooned to $306,500. And then there's education; today's parents are simultaneously trying to save for their kids' education while still paying off their own. According to CNBC, the cost of a Harvard education costs 17 times as much as it did in 1971, and as of 2012, 71 percent of college graduates carried student debt, averaging $25,550 for public school students, and $32,300 for private college students.

The average student loan borrower in their 30s (and therefore more likely to have a kid or three) actually owes more than those in their 20s, despite having been out of school longer. CNBC reported that the average graduate between 30 and 39 still carries a student loan debt of $34,033. And that's on top of the $21,248 to $51,985 it will cost them to raise a baby in just the first year alone, according to NerdWallet. However, a recent Harris poll found that about half of millennials planning for their first kid expected to spend less than $5,000.

Ironically, considering how spoiled millennials are supposed to be, they're actually the ones doing the spoiling. CNN has reported that a T. Rowe Price survey found that more than half of parents intend to buy their kids literally everything on their wish lists this holiday season, to the tune of $422 per kid. Nearly two-thirds of parents admit to spending more than they can afford; one-quarter have even used funds from their emergency savings or retirement accounts on gifts, or even taken out a payday loan (never, ever take out a payday loan).

Another survey, this one by TD Ameritrade, found that while millennial parents have $9,180 in student debt, on average, and $11,995 in other debt, 90 percent of them still plan on paying for their kids' college educations, while only 60 percent of their parents did the same. Millennial parents are prioritizing education over emergency and retirement savings, and I know you love your kids, guys, but that's no bueno. They can get student aid if they have to, but nobody's going to float you a new water heater or room and board in an assisted living facility. The best way to prioritize those funds, according to Vanguard, is to save for retirement, then pay off debt, then create an emergency fund, and only then ( if you have anything left) should you pay for college. Take a lesson from your parents and put yourself first for a change.