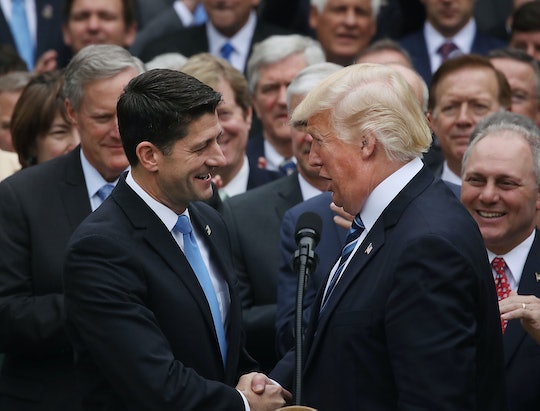 How Much Giving Birth Would Cost Under Trumpcare

Now that the American Health Care Act has been voted through in the House of Representatives and passed on to the Senate, Americans are taking a much more serious look at the Trump administration's plan for repealing and replacing Obamacare. Considering that the replacement plan would allow states to roll back essential health benefits — which currently include pregnancy, maternity, and newborn care under the Affordable Care Act — many women are understandably worried about maternity costs. If that mandated coverage disappears, here's how much giving birth could cost under Trumpcare. Fair warning: it's not cheap.

Critics of the ACA like to defend cutting maternity coverage by explaining that not everyone needs pregnancy coverage, as the White House press secretary pointed out recently. "If you're an older man, I think you can generally say you're not going to need maternity care," Sean Spicer told reporters in March, according to Mic. It seems Spicer conveniently forgot that the United States' current president, who is 70 years old, has an 11-year-old son (as well as the fact that men are just as involved in the baby-making process as women are).

That said, over 70 percent of American women age 30 to 34 have children, according to Time, and their maternity costs could skyrocket under Trumpcare. If the AHCA gets approved by the Senate and Americans find their health care coverage stripped of pre-existing condition protections and mandated essential health benefits, pregnant women could be looking at a steep increase in costs.

According to estimates made by the Center for American Progress, an independent think tank, women seeking insurance could see a 425 percent hike in premiums due to their pregnancies, which equals a steep $17,060 minimum added on to a standard premium.

Pregnant women who can't afford insurance — or whose insurance would no longer cover childbirth as an essential benefit under the AHCA — could be looking at even higher costs for giving birth. According to a report by Truven Health Analytics, the average hospital bill for a natural delivery in the United States in 2013 is $30,000. That number can balloon up to $50,000 for a C-section, and the price of a delivery alone can routinely reach $10,000 to $15,000.

According to the BBC, in 2013, the United States was the most expensive place to give birth in the world due to its lack of public health care. The Affordable Care Act currently ensures that having a baby will not financially derail a family, but if the American Health Care Act passes the Senate, many pregnant Americans could once again be priced out of insurance that covers their maternity care, and families be thrown into debt due to exorbitant childbirth fees.

If you're concerned about the cost of childbirth under the American Health Care Act, you can contact your senator to discuss the importance of maternity care coverage. It could make a world of difference to families across the country.