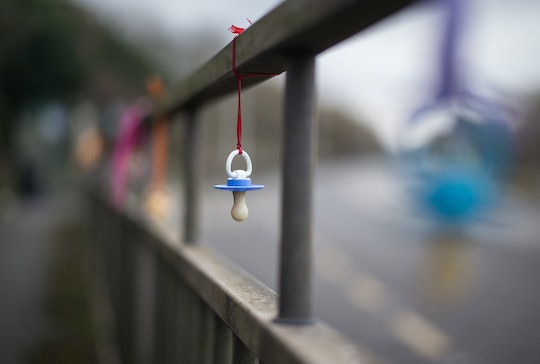 Under "Trumpcare," formally known as the American Health Care Act, Republicans want to strip the "essential health benefits" provision, according to TIME's Money feature. Under the Affordable Care Act, also known as Obamacare, those essential benefits covered 10 categories that included coverage of maternity and newborn care. If eliminated, insurers could once more sell plans that do not cover pregnancy-related costs — which is bad news for moms, families, and babies. Let's take a look at how much maternity hospital stays would cost under Trumpcare, as it stands now.

According to Money, without coverage, maternity bills could be outstanding for women. The outlet reported that the average total cost of pregnancy and newborn care varies, but in 2010, stood at about $30,000 for a vaginal delivery and $50,000 for a C-section. Money reported that the national average out-of-pocket cost to give birth for those with insurance is around $3,400.

To really put things in perspective, the Huffington Post reported that pregnancy would be up to 425 percent more expensive under the new Trumpcare plan. That number is based on estimates from the Center for American Progress.

The Independent reported the same statistic, and noted that a completed pregnancy, with no or minor complications, could result in an insurance premium hike of $17,060 under the AHCA. Again, that's for a healthy pregnancy. If there are any complications, that maternity stay would become even more expensive. And that's for those who have premiums to take into account — if you don't have insurance at all, you'd have other major costs to worry about.

John Healey with the Los Angeles Times reported that maternity coverage is expensive to provide — and that the average cost is about $17,000 a year, or more than $1,400 a month, for women who have private insurance coverage. That might be part of why not covering maternity costs, like a maternity stay, is up for debate under Republicans' AHCA.

The Republicans who pushed Trumpcare so hard also claim to be "pro-life." But there's nothing "pro" about taking away essential health benefits, that would result in insurance providers not being required to cover services like pregnancy, maternity, and newborn care.

Dr. Leah Kaufman, an obstetrician-gynecologist in Manlius, New York, and the legislative chair for District II of the American Congress of Obstetricians and Gynecologists, wrote a special commentary for Syracuse.com about how the American Health Care Act will hurt pregnant women. She noted that under Trumpcare, insurers would also be allowed to not cover Cesarean section births, or charge women a 25-percent premium surcharge to have that coverage. Imagine how much maternity stays for a C-section would cost a new mom if her insurer just refused to cover the birth. The number would be astronomical.

According to U.S. News & World Report, in July 2015, so just about two years ago, the estimated average hospital childbirth facility costs for a maternity stay "ranged from $1,189 to $11,986, with a median of $4,215." The outlet noted that those figures didn't include professional fees for obstetricians, midwives, or anesthesiologists, who usually bill separately for their services. So it's not even just the cost of the stay mothers have to worry about — there are additional fees at play as well. And according to numerous aforementioned sources, those costs would increase under Trumpcare.

If these health care professionals and advocates are opposing Trumpcare, it's probably safe to say that maternity care is in danger of changing under the health care plan — and not in a good way.

While the bill may have gotten over its first hurdle in the House, the Senate still needs to vote on Trumpcare. So if you oppose it and want your representatives to know, find out how to contact your senators here.

More Like This
Doctors Swallowed LEGOS To Prove Everything Is Awesome For Kids Who Do The Same
Does The FDA's Plan To Limit Lead In Baby Food Go Far Enough?
Florida Teachers With “Unvetted” Classroom Books Could Face Felony Charges
Covid Vaccine “Deserts” For Kids Under 5 Make It Almost Impossible For Parents To Find Shots
What Parents Are Talking About — Delivered Straight To Your Inbox