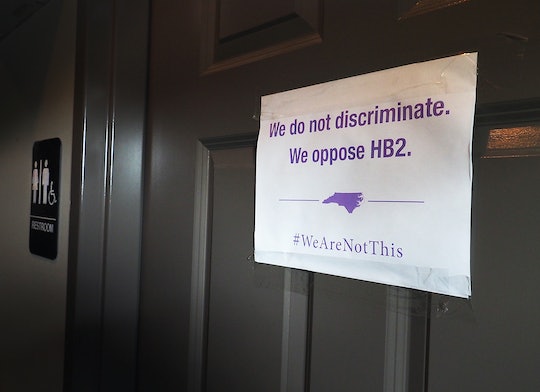 It's been just over a year since North Carolina Gov. Pat McCrory signed H.B. 2 into law, the controversial and discriminatory "bathroom bill." Almost immediately, several businesses and celebrities joined the public outcry by boycotting the Tar Heel State. According to a new report from the Associated Press, how much North Carolina's bathroom bill cost the state, despite North Carolina Republicans's assurances that it would pose little economic impact to the state. Oh, how they were very, very wrong. The AP estimates the North Carolina bathroom bill could cost the state as much as $3.76 billion in lost business through the end of 2028, well beyond estimates when the bill first became law. That's right: Billion with a B — for Bad Bathroom Bill, it would seem.

The bathroom bill was so-dubbed due to the fact that it mandated that transgender individuals must use the bathroom according to their sex assigned at birth. Despite the obvious issues with enforcement, it's just a blatantly discriminatory act that targets a single group of individuals. The AP report examined several businesses and investments that were planned for North Carolina but were ultimately pulled due to the passing of the bathroom bill into law. The AP estimates that by the end of 2017 alone, North Carolina will be out $525 million in lost business.

Meanwhile, online payments giant PayPal was one of the first businesses to announce last year it was withdrawing plans to build a new facility in Charlotte, North Carolina after the bathroom bill went into effect — costing the state 400 new jobs. Since then, more than TK businesses and companies have announced similar plans to cancel or withdraw business plans in the state, including such high profile companies as Adidas, Deutsche Bank, and the NBA. The NBA moved the 2017 All-Star Basketball game from Charlotte, North Carolina when it failed to repeal the bill last year.

Meanwhile, there's been another economic casualty due to the bathroom bill: North Carolina's former governor Pat McCrory is having trouble finding work in the private sector because it's his signature that made H.B. 2 law. McCrory told the Raleigh News & Observer, "People are reluctant to hire me, because, ‘oh my gosh, he’s a bigot’ – which is the last thing I am." Well, boo freakin' hoo Mr. McCrory — pardon me while I try and find the world's smallest violin for your troubles.

According to the National Conference of State Legislatures, 16 states have introduced similar bathroom bills in 2017 alone. As the Associated Press report illustrates, lawmakers should pay attention the economic fallout from North Carolina's bathroom bill — because it could cost them far more than they bargained for when pushing these discriminatory and completely unnecessary kinds of laws.