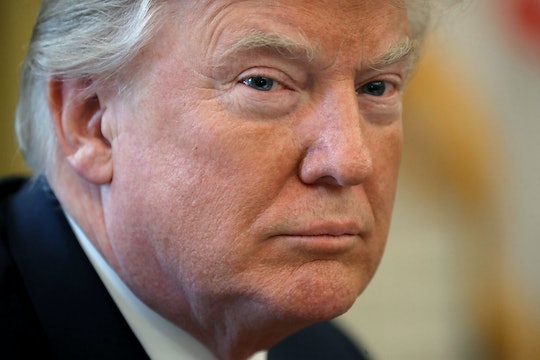 As we draw closer to the year-end break, most people are prepared to spend a little extra money over the holidays on gifts, flights home, and cosy dinners. But there's another cost—one that's slightly more unexpected—that comes out of taxpayers' pockets, too: as president, Donald Trump's Mar-a-Lago Christmas vacation this year could cost taxpayers a pretty penny.

According to Palm Beach Daily News, the White House didn't officially announce the Trump family plans for the holiday season, but a "VIP Movement" alert was issued by the Federal Aviation Administration for Palm Beach for a period between Dec. 22 and Jan. 1. First Lady Melania Trump and two of the president's sons, Donald Jr. and Barron, were spotted in Palm Beach earlier in the week, and Trump himself landed in Palm Beach on Friday afternoon.

The federal government hasn't released exact numbers detailing how much is spent on Trump's vacations, but according to the Associated Press, estimates made by different groups have put the cost of a presidential weekend at Mar-a-Lago somewhere between $1 and $3 million. Part of that is due to Air Force One's enormous costs — a single hour racks up $206,337 in costs — but it's also partially due to the expenses incurred by maintaining security at Mar-a-Lago. (In 2008, former Secret Service Director Mark Sullivan said agency protection for a single presidential candidate can cost $38,000 per day, according to CNBC. I'm assuming presidential protection is more expensive, but let's work with the numbers we have.)

An Air Force One flight from Washington to Palm Beach takes two hours, so we can start with an easy $824,000 for Trump to get to Mar-a-Lago and back. Add on 10 days of Secret Service protection ($380,000) and we're already looking at over $1.2 million in taxpayer dollars, minimum. That doesn't include support aircraft (that usually accompanies Air Force One), extra costs associated with security (such as housing them at Mar-a-Lago), and protecting the rest of the Trump family while they're on vacation.

That number also doesn't include local costs — because not only does Trump's own security increase while he's on vacation, but Palm Beach County Sheriff Ric Bradshaw told The Wall Street Journal that Trump's visits cost the city around $65,000 to $70,000 a day. If Trump spends 10 days at Mar-a-Lago over the holidays, that's at least $650,000 just in extraneous local costs. We're now at an absolute minimum of $1.85 million.

So, overall, it seems like Trump's holiday vacation could easily cost taxpayers a few million dollars. And while presidents taking some time off during the holidays is a relatively routine thing to expect, there's one very good reason to point out just how much Trump's vacation will cost Americans: in the past, Trump himself complained loudly about any breaks taken by President Obama.

Here are just a few of his criticisms, in no particular order, collected below:

There's nothing wrong with taking a vacation, and it's usually a healthy thing to do in order to avoid burnout in stressful roles. However, after widely criticizing Obama's vacations, Trump went on to take more time off during his first 100 days in office than Presidents Obama, George W. Bush, and Bill Clinton did.

White House press secretary Sarah Huckabee Sanders has dismissed criticism of the cost of Trump's vacations in the past. "The bottom line is the president is the president no matter where he goes, and he doesn't get to control the level of costs in security that may come along with that," Sanders said in May, according to MSN.

Apparently, that's an excuse that Trump is still willing to fall back on during the holiday season — without addressing his past criticism of former presidents' travel. Happy holidays, indeed.