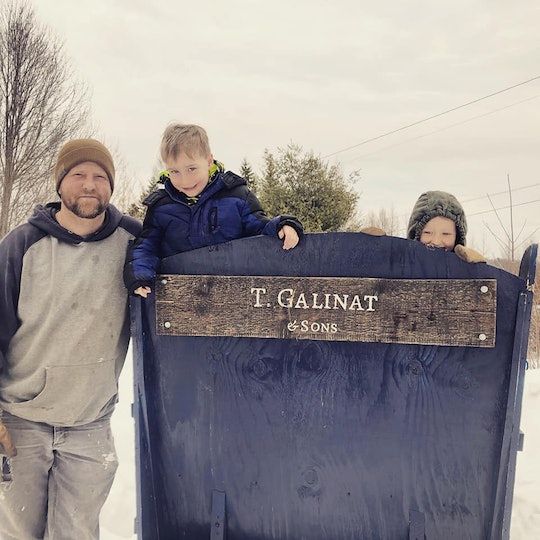 Here's How One Hunter, Farmer, and Father Practices Safe Gun Storage At Home

In Peacham, Vermont, one can truly feel alone. Roads can be miles apart from one another, houses are spaced far enough apart where you don’t even see your neighbors, and the only sounds you’ll hear at night are those of the great outdoors. That’s what Thomas Galinat likes so much about the area. While he originally moved to Peacham to farm with his cousins, he ended up staying for the natural splendor, eventually buying a house and farm of his own.

His farm, the Firefox Revival Farm, offers sleigh rides and romantic getaways for those looking for a break from their busy day to day lives. It’s operational to boot, as they raise a draft horse, alpacas, and cattle, which they harvest for meat, fiber, milk, and wool. It also provides an ideal backdrop for his two kids, Josiah and Arden, who get the type of rustic upbringing most children their age can only dream of.

“It's pretty awesome to live in a place where your kids can be 500 yards away and you can’t see them, but you know they are safe,” Galinat tells me. And it was this move to Vermont that prompted Galinat to learn to hunt.

While Galinat’s grandfather, Frank, was a proud gun owner and hunter, involved in Revolutionary War reenactments, and the National Muzzle Loading Rifle Association (NMLRA), his father never caught the bug. Galinat was too occupied with his interest in soccer to fully embrace the hobby in his youth. However, after settling in Vermont, the new woodsy surroundings brought an interest in hunting.

“When we first moved to Vermont, it was so my wife could attend grad school," he recalls. "I remember I first thought, ‘Oh, we are finally in the country now.’ So I went to a hunter safety course."

Galinat views firearms as tools for hunting, with each gun meant for a specific task. At present, Galinat has 13 different guns, from family heirlooms to those designed for specific types of animals. “Every gun I own has a very distinct tool purpose, you know, just like a carpenter,” Galinat says, before describing the differences between some of his firearms. “I have a gun for coyotes, a deer rifle, a muzzleloader...and then two other handguns, one for sheep and one for smaller animals.”

Galinat prioritizes keeping his firearms secure, not only for the safety of his children, but also in case there were to be a break-in at his house. “I have what's called a gun locker," he explains. "So I have a safe that's locked and so all the firearms are in a safe...The ammunition is in these storage boxes with a separate lock on them, so it takes two keys to get them.” While Galinat keeps many steps between his kids and his firearms, it doesn’t pose any inconvenience on his own hobbies and gives him peace of mind.

And while his guns are stored securely, Galinat is still aware that his kids will eventually become more curious about his collection.

Rather than leading with fear, Galinat uses compassion to teach his kids about weapons, telling them of the dangers of firearms but also their uses, and how they would never need to use those tools outside of hunting. Galinat looks at his firearms the same way he does his chainsaw, explaining how if he has done his job as a parent, then he knows his children can safely put away his chainsaw. “I know they will [put away the saw] without putting their hand on the gas or the chain [and] I expect the same from a firearm. They know and understand how dangerous they are, but more importantly how to safely handle one.” This is especially important because, as Galinat notes, he knows he stores his own guns securely but there’s always a chance his children could encounter a gun elsewhere.

Living in a rural area, Galinat is well aware that others in his community own guns. While he has a great deal of trust for his neighbors, he knows that it’s important to make sure others in his community are practicing safe gun storage. If a gun is stored improperly at a house where Galinat's kids might be visiting, his kids are at risk of family fire. Family fire is any shooting involving an improperly stored or misused gun found in the home, resulting in death or injury. Every day, eight children and teens fall victim to family fire.

Galiant has a unique approach to having this conversation that works for him. “I never ask about gun storage as a blatant question, because it's an extremely emotional subject. I usually ask as if asking for myself, ‘Oh geez, I'm paranoid about my kid, what do you do about your gun?’ By making it seem like it's my problem, people feel more comfortable opening up to me.”

Just by opening up the conversation, Galinat is doing his due diligence so that others are aware of family fire and the importance of safe gun storage, and so that he can rest easier when his kids go out. “If I can help my kids’ friends’ parents be aware of the subject, just bringing it to the forefront of their mind, I think that is really just as helpful as saying ‘what are you doing?’ By telling them ‘hey, I have a paranoia about my kids finding my gun, what do you do?’ All of the sudden, they might develop a better mindset, hopefully.”

This post is sponsored by the Ad Council and Brady, creators of the national End Family Fire campaign. For more safe storage resources and information visit EndFamilyFire.org.

More Like This
When Does A Baby Recognize Their Father? A Pediatrician Explains
Reddit Had Tons Of Advice For Mom Whose Husband Finds Parenting “Painful”
Josh Duhamel Is Glad He Took Fergie's Advice About Dating After Divorce
Jessie James Decker's Husband Is Worried A Vasectomy Will Take Away His "Power"
What Parents Are Talking About — Delivered Straight To Your Inbox