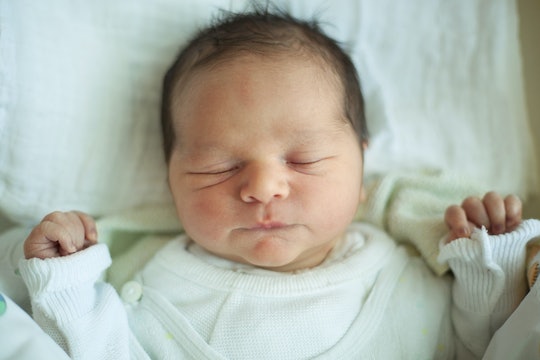 Since first taking office in January, President Donald Trump has been vocal about his desire to see the Affordable Care Act — aka Obamacare — repealed and replaced with a new health care model he's previously insisted would offer better coverage and lower premiums. So far that hasn't happened, despite numerous attempts by the GOP in the Senate, and now, the latest health care proposal, the Graham-Cassidy Bill, is being pushed for an end-of-September vote. But many are worried that it could actually be the worst version yet. Here's how Trumpcare 3.0 would affect premature babies and kids with high health care costs or pre-existing conditions — because regardless of what the POTUS may have once claimed, it definitely won't ensure health care for all.

When you're a parent of a medically-fragile child, worrying about insurance and hospital bills only adds to an already-immense emotional burden. Having to watch while your baby faces an extended NICU hospitalization, or surgeries, or complex medical treatment, is grueling and heart-wrenching in a way that's impossible to truly understand unless you've experienced it. Yet it's often also incredibly expensive — a fact that Obamacare tried to solve when it introduced rules prohibiting things like lifetime caps on insurance, denying coverage to those with pre-existing conditions, and charging more to high-risk customers.

The good news, at least, is that Graham-Cassidy won't actually do away with the restriction on pre-existing conditions, according to The Los Angeles Times, meaning that, even if the bill passes, insurance companies would still be required to offer policies to sick Americans. The bad news? Like previous GOP health care plans, Graham-Cassidy will allow lifetime insurance caps and higher premiums for those customers, which will likely result in millions of people losing access to affordable health care, according to CNBC, regardless of whether they are technically still allowed to purchase it.

But that's not all: the bill will also go further than any of its predecessors, proposing a radically different health care system that would basically do away with Obamcare subsidies entirely, as well as dedicated federal funding for Medicaid. According to The Los Angeles Times, Graham-Cassidy would "eliminate insurance subsidies provided through the Affordable Care Act to about 8 million consumers" who do not qualify for Medicaid, but who would otherwise be unable to afford their insurance premiums. And for the more than 70 million Americans who rely on Medicaid to access health care — including low-income children, mothers, senior citizens and those with disabilities — the news is even worse. While Obamacare actually increased the number of Americans eligible for Medicaid coverage, Graham-Cassidy would essentially do away with it, instead opting to provide states with a set amount of health care funding to use as they see fit.

There are literally millions of Americans who would likely be harmed by this — according to Forbes, it's estimated that nearly 32 million people will actually lose their insurance coverage — but any parent who has ever had a premature or critically ill child can tell you it would definitely have a huge impact on babies and young children specifically. According to the March of Dimes, approximately 1 in 10 babies is born premature in the United States, putting them at risk of severe medical complications, long hospital stays, and life-long health issues — not to mention the very real risk of death. According to a 2009 report by the organization, the average cost of medical care for a premature baby is about $49,000 in its first year of life, according to CNN. But for many babies, the cost is much, much higher (according to TIME, the cost of NICU care can literally cost some families millions of dollars).

When I gave birth to twins at 25 weeks gestation in 2012, we knew we'd be in for a rough ride. By the time my husband and I finally took our babies home — 124 long days later — our children had spent four months in the highest-level NICU that exists, with constant round-the-clock monitoring from nurses, doctors, respiratory therapists, and other medical staff. They required regular diagnostic tests — particularly my daughter, who suffered a massive brain bleed after birth — and when all was said and done, she'd also had two brain surgeries, and would need ongoing medical care for the rest of her life (she was eventually also given a cerebral palsy diagnosis, further complicating her medical needs).

My children were lucky enough to be born in Canada, where our universal health care plan meant that we did not pay a single cent (nor did we even ever receive a bill) for the medical care they received. But had they been born in the United States prior to the ACA, they could have easily reached the lifetime coverage cap that our insurance company would have been able to impose upon them. And if they hadn't? Well, given that premature babies and sick infants often require years of related follow-up care, it probably wouldn't be too long until they reached their coverage limit. Now, Graham-Cassidy is poised to return to a system where that could easily happen again.

Coverage caps aren't the only concern for children though. After all, kids of all ages can have complex health care issues, even if they are healthy at birth, and the fact that Graham-Cassidy would allow insurance companies to charge them more for being high risk will mean it will be that much harder for them to access affordable care — especially if Medicaid and the insurance subsidies introduced by Obamacare have been scrapped.

Yet none of that even takes into consideration the consequences the bill would have for the millions of low-income children who currently qualify for Medicaid. According to the Center for American Progress, Graham-Cassidy would begin limiting increases in Medicaid funds for children and non-disabled adults, and would also establish a "Medicaid per enrollee cap," according to the Kaiser Family Foundation. The bill would also no longer require insurers to cover services considered "essential" under the ACA, according to Forbes, which means parents could all be on the hook for costs related to emergency services, hospitalizations, prescription drugs, and pregnancy and newborn care. In other words? Unless you're in the privileged position to be in an upper-income bracket and/or to have healthy children free of any complex or ongoing medical conditions, the Graham-Cassidy bill likely won't benefit you.

Given the bill's provisions, it's no surprise that many Americans are urging their senators to reject the bill, and a number have already indicated that they have concerns about it. Yet given how hard the GOP trying to pass it through despite the widespread criticism, it's time to speak up if you haven't yet (and to keep speaking up if you have). Senate members' contact information can be found here, so if you're a parent whose children's health care could be affected, it might be a good idea to get in touch ASAP.