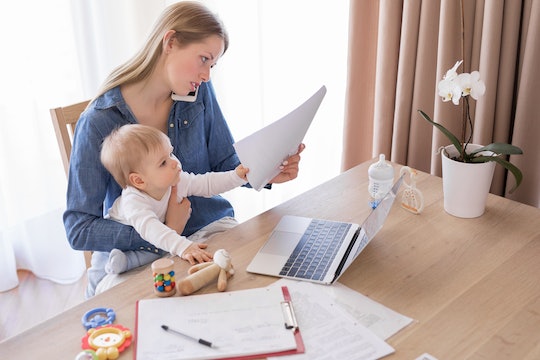 Last week, Republicans in Congress delivered the first major legislative victory for President Trump since he entered office almost a year ago. The House and Senate rushed through a massive tax overhaul despite low approval ratings from most of the public, according to ABC News — and despite independent analysts calling it a win for corporations and businesses, but a net loss for almost everyone else. Because of the complexity of the plan (and how quickly the GOP pushed the tax plan to the president for signature), nailing down exactly how taxpayers will fare has been a difficult question to answer. The most pressing question for many households right now is, how will the tax plan affect families, especially families with two or more children. And the answer, according to the nonpartisan Tax Policy Institute (among others), is “it depends.”

Analysts have called the Republican tax plan the most sweeping change to the U.S. tax system in more than 30 years. That’s not hyperbole; the new plan upends everything from how much each income bracket will pay to what individuals are allowed to deduct or credit on their taxes. Much of the media attention has been on how the tax plan benefits the super wealthy through deep cuts to rates for the highest incomes and proposed changes to the alternative minimum tax.

But because fewer than one-third of Americans itemize their taxes, it’s the changes to the standard deductions, personal exemptions, and the child tax credit that will affect most middle-income families, according to a Tax Policy Center analysis.

The new tax plan expands the standard deduction for individual filers from $6,350 to $12,000, according to ABC News, and doubles the deduction for joint filers from $12,700 to $24,000. That change, along with doubling the child tax credit from $1,000 to $2,000 per child, would seem like huge gain for families with kids. But the plan also does away with personal exemptions in a way that actually increases how much of their incomes could be considered taxable, according to the TPC. Currently, taxpayers are allowed to claim exemptions for themselves, a spouse, and dependent children. Under the new plan, over time most families lose more in exemptions than they gain under the increased standard deduction and child tax credit — especially since, unlike the tax cuts to corporations and the wealthy, the tax cuts for most households will go away by 2027.

The impact of those changes on a family’s tax burden deepens for each child added to the household.

Smaller Families Could See Some Tax Savings — At First

But For Larger Families, The Tax Hit Would Be Immediate & Significant

Most middle- and low-income married couples would face a similar scenario, according to TPC. A couple with children would benefit from the higher standard deduction, but without personal exemptions, more of their income would be considered taxable under the new plan. Larger families could miss out on thousands in deductions because of that change, according to a Romper analysis. A married couple with five kids could lose more than $10,000 per year — and a single parent raising five kids could lose more than $12,000 in deductions, according to that analysis.

What's more, the scenarios get worse as children get older. The child tax credit is currently available to families with dependent children under 19, or children in college up to age 24. The new plan only allows the full $2,000 deduction for children under 16; older kids (who, presumably become self-sufficient on their 17th birthdays...) are eligible for a new $500 family tax credit for dependents instead. That’s going to be a huge blow for married couples supporting college-age kids, according to the Chicago Tribune. And, like the other scenarios, any possible savings will go away over the next 10 years, as the personal tax credits disappear or are erased by inflation, according to that report.

But even these basic scenarios will likely change based on where a family lives and how they earn their money, according to the TPC analysis. Plus, other hidden jewels in the plan, like the repeal of the Affordable Care Act individual mandate, means that even a lower initial tax bill might be offset by higher insurance premiums and other healthcare expenses. So figuring out exactly what the tax plan means for an family’s individual tax situation will probably involve getting help from a professional.

That’s where the final irony of the plan really sets in. Despite the breakneck speed of the proposal, and the confusion around how all the changes play out for most households, the new plan doesn’t really encourage people to get professional help. In addition to all the other changes, the plan ends the current deduction for fees associated with professional tax preparation.

So basically, good luck on your 2018 taxes, folks.