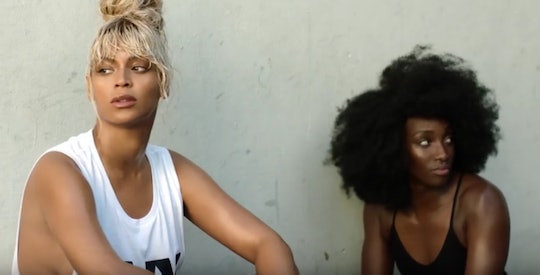 Here’s How To Get Ivy Park On Sale, So Getting In Formation Doesn't Break The Bank

Well, it’s been confirmed: Beyoncé has launched a new line of fitness apparel, Ivy Park, and fans are pretty excited about it. One look at the preview video on IvyPark.com is enough to get any Bey fan ready — credit card in hand — to rock the new athleisure line. But, while we all wait for the superstar’s latest fashion venture to hit store shelves on April 14, there are still quite a few important questions to be answered. For example, where will Ivy Park be sold? Or more importantly, how can you get Ivy Park on sale? Because — let’s be honest — given Bey’s reputation for glamour and luxury, it’s pretty much a guarantee that anything from Ivy Park will be on the expensive side.

According to the promotional video on the company website, IvyPark.com, the star’s new line will offer a wide array of items meant to meet the style and taste of a variety of shoppers. And, to be fair, not every item from Ivy Park will be at the high-end price range, according to FashionBombDaily.com. The brand will debut with a 200-piece clothing selection that includes everything from snazzy sports bras to mesh-accented bodysuits — and at prices ranging from $30-$200, according to FBD.

Of course, whether fans with only $30 to spend can walk away with an Ivy Park sweatband or a sweatshirt remains to be seen. But the good news for sales watchers is that high-end retailer Nordstrom will stock Queen Bey’s activewear line both online and in some stores when the brand is available to customers in just a couple of weeks. Why is that good news? Well, the top-drawer retailer often sends merchandise from Nordstrom stores and Nordstrom.com to its discount retail chain, Nordstrom Rack. That means, if bargain-seeking fans are willing to hold out a bit longer, it might be possible to get Ivy Park merch on sale at The Rack for 50 to 60 percent of the store’s regular prices.

The activewear company is Beyoncé’s first attempt in fashion since the failure of her House of Dereon ready-to-wear clothing line. She launched House of Dereon back in 2006 in collaboration with her mother, Tina Knowles, according to BeautyRiot.com. And, according to the brand’s official Facebook page (the official website is now defunct), the company was meant to “fuse celebrity power and design artistry into a brand of global importance” and to be a fashion house “where entertainment and fashion merge seamlessly.” But fans and fashion critics weren’t exactly pleased with the outcome. According to BeautyRiot, the HOD brand was considered overpriced, garish, and ugly.

Still, fans seem to be ready to forgive and forget Bey’s fashion past, if the Twitter reaction to Ivy Park is any indicator. Starting April 14, the entire Ivy Park line will be available for purchase through the company website, as well as at Topshop, Net-A-Porter, and Nordstrom. So get your coins ready, Bey fans.