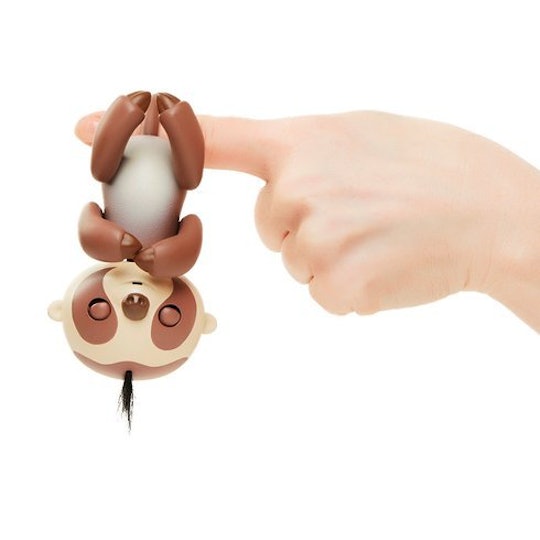 Here's How To Get Kingsley, The Adorable Sloth Fingerling

Is it just me, or are there always hot new toys being released at the same time each year? OK, so obviously, that's because companies want parents to buy the toys for the holiday season, when they know demand will be at the all-time high of the year, but still. It always seems that no matter what, there is one toy a year that sells out before Christmas, and that every child inexplicably wants to get their hands on. This year, that toy is undoubtedly the Fingerling. So, how can you get the sloth Fingerling in particular? The hottest toy of the season is unrolling a new model, but it's still going to be pretty hard to find.

Little robotic animals that attach onto the fingertips of children don't seem like they'd be that popular, but, kids can surprise you. Currently, the little animatronic toys are available in monkey form only, although a unicorn version has been released and promptly sold out in stores everywhere. But, as TIME reported that the toy company "will be making a big announcement about a new Fingerlings Sloth creature very soon," how can parents get their hands on the new Fingerlings?

For now, it seems as though they might just have to keep their eyes peeled. Romper has reached out to WowWee, the company behind the Fingerling sensation, and is awaiting a response on when parents can expect the sloth variation to come back in stock.

While the concept of the Fingerling might seem a little strange, they're actually pretty cute. Not only that, but they're capable of a lot more than just wrapping around your kid's finger. As Newsday reported, the original monkey Fingerling is able to "come to life with 40 ways to play and 50 sounds to let everyone know how they are feeling. They make realistic monkey sounds and have blinking eyes and a curly hanging tail."

And that's not all. The new unicorn Fingerling is reported to also have its own special traits. According to TIME, it can do a lot more as well. Gigi, the unicorn, "responds to touch, motion, and voice. Gigi might blink her eyes, turn her head, talk, whinny like a horse, or even burp and fart depending on how you interact with your new robotic pet."

So, clearly Fingerlings are a hit among kiddos. And parents love them, too, which makes sense considering they start at just $14.99, making them both reasonably priced and fun. But the newest Fingerling may be almost impossible to come by. As one site reports, Kingsley the Sloth, as he is known, is already sold out on Amazon and Toys "R" Us, and there is no indication as to when it will be back in stock. Here's what the folks over at IBBB.com have to say about the Fingerling sloth:

Kingsley will even blink his little eyes and even turn his head from side to side especially when you pet him, rock him to sleep (yes he sleeps, thank God), or even hold him upside down. He’ll hang right from your kids finger! Oh, and if you blow him a kiss he’ll actually kiss you back.

However, it's still unclear when or where Fingerling sloths will go back on sale, although many are hoping they'll do so at least before the holiday season kicks into high gear. But, as they were previously sold at Amazon and Toys "R" Us before they sold out, there's hope Kingsley could return to those locations soon. But if that doesn't happen, parents can rest assured that Toys "R" Us still has five other Fingerling monkeys available online, and there might be more options in certain stores as well.

But, if your kids are dead-set on getting the new Fingerling sloth, you might want to start doing some serious investigation before holiday season officially arrives. Check sites like Ebay as well as any Facebook groups to see if anyone has any that they're willing to resell. And in the meantime, check back with WowWee's website for updates on Kingsley's (hopeful) arrival.

Whichever route you choose, it's clear that tracking this little sloth down will be a mission.