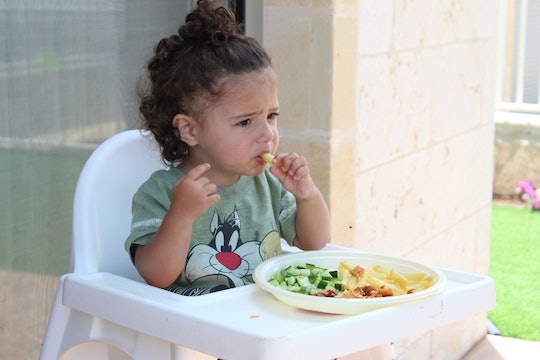 For parents of picky eaters, the struggle is real. Dinnertime can easily morph into an episode of Let's Make a Deal, and negotiating with a tiny human can get old real quick. The good news? A recent study has found a link between children's temperaments and their willingness to try new foods. If your baby will only eat certain colored foods or freaks out when they see a vegetable, don't stress out — there's a scientific reason behind your child's pickiness. That being said, here's how to tell if your baby will be a picky eater forever.

According to the study, "Does Temperament Underlie Infant Novel Food Responses?: Continuity of Approach–Withdrawal From 6 to 18 Months," conducted by researchers Kameron J. Moding and Cynthia A. Stifter, there's a direct correlation between a baby's temperament and how they approach new food. According to Psychology Today, Moding and Stifter collected data on "80 babies and 80 primary caregivers," and they observed the babies when they were were 6, 12, and 18 months old.

At the "6- and 12-month visits, the babies were introduced to new foods and new toys," and "at 18 months, the toddlers were taken to a 'risk room,' where they could interact with four objects: a tunnel, stairs next to a large mattress, a large black box with painted eyes and teeth, and a gorilla mask placed on a table," according to Psychology Today. During these laboratory visits, the children's reactions were recorded for further evaluation.

Well, it turns out the babies who avoided the new toys were also not all that excited to try new foods. Moding and Stifter referred to these inhibited babies as the "low-approach" group, according to Fatherly. Furthermore, Moding and Stifter found that a baby's early personality will set the tone for how they approach food throughout their life. Moding said, according to ScienceDaily:

It was striking how consistently the responses to new foods related to the responses to new toys. Not only were they associated at 12 months, but those responses also predicted reactions to new objects six months later. They also followed the same developmental pattern across the first year of life.

Translation: if your kid is cautious, shy, or just doesn't give AF, they'll likely be a picky eater forever.

But wait, there's still hope for the parents of picky eaters. Although temperament is something a child is born with, a parent has the ability to modify their child's behavior.

Moding said, according to ScienceDaily:

Well, it's like Aliyah sang in "Try Again" — "And if at first you don't succeed/ Then dust yourself off and try again."

It goes without saying that dealing with a picky eater isn't always easy. It's important to remember, however, that your child can't control how they approach new foods. Science, remember? The best thing you can do as a parent is to encourage your child to try new foods ... again and again.