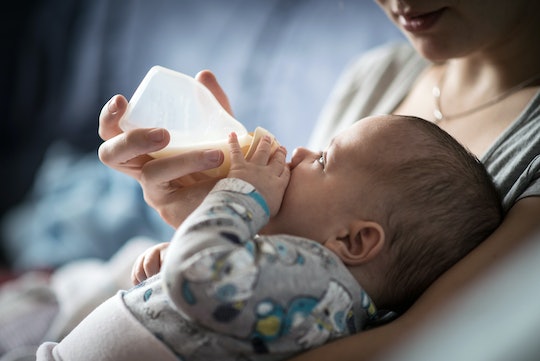 Here's How To Transition Your Baby From Breast Milk To Formula, According To Experts

Whether breastfeeding was relatively easy or a struggle, something you've been doing for a while or for a short period of time, the decision to stop is rarely easy. What's best for you and your baby when it comes to feeding is your decision. Full stop. But once you make the decision, it's time to figure out how to transition your baby from breast milk to formula in way that makes sure both you and your baby are comfortable with the switch. That's easier said than done, to be sure, but a few experts have some tricks and tips to make the transition as painless as possible.

According to Everydayfamily.com, you can switch one feed every 3-5 days from breast milk to formula until your baby has completely switched over to formula, if this is your desired result. This should allow your breasts time to slow down milk production so you are less uncomfortable throughout the process of weaning.

If your baby has never taken a bottle before, you'll want to start introducing a bottle before you start actively trying to switch him or her to formula from breast milk, according to KellyMom. Introduce a bottle when your baby isn't voraciously hungry so that he or she can master the mechanics of the bottle without getting frustrated or hungry, too. If you introduce the bottle when your baby is "hangry" and can't get the hang of the whole bottle thing, you run the risk of having your baby reject the bottle altogether. At the very least, it will probably make the transition from breast to bottle significantly more difficult.

Some babies don't take to a bottle right away, especially if they've been exclusively breastfed for a while. If your baby won't take a bottle you might need to diagnose whether he or she is unable to figure out the mechanics of it, or if they're just stubborn and only want milk from the source they've grown accustomed to. According to Balanced Breastfeeding, the former baby needs practice and maybe a different kind of bottle that only releases milk when the baby properly sucks. This will keep your baby from choking on extra milk that just seeps out without sucking.

If your baby is stubborn and only wants mom to feed him or her, you'll know because he or she has been able to take a bottle before, even months earlier, and maybe even sucks on a pacifier. The sucking isn't the problem, obviously, so you'll need to be extra persistent when offering bottles.

Balanced Breastfeeding explains there are multiple reasons a baby might be stubborn about taking a bottle, saying:

"Is it from her father or another non-mother person because she has learned that she only nurses from mom, not takes a bottle? Do you have to offer it when she is very hungry? Just starting to become hungry? Upon waking from a nap? After just falling asleep? While walking in a sling? In the nursing position? In a position completely opposite from the nursing positing, such as in a bouncy chair or faced away from you? When the milk is just the same temperature as breastfeeding? When the milk is cold so it is different from breastfeeding?"

Basically, experimentation and persistency in offering the bottle is key to overcoming that stubbornness. And trying all of those ideas might just get your baby over the hump to taking a bottle!