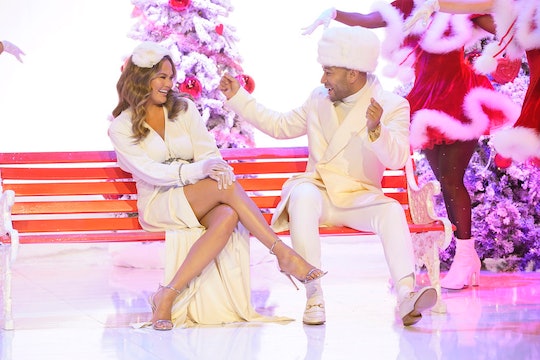 'A Legendary Christmas' Has Never Looked *So* Good

Christmas is a time for indulging. The best kind of indulgence comes to you soon with A Legendary Christmas. What's not to love about John Legend, Chrissy Teigen, and a whole bunch of celebrity carolers knocking on Los Angeles doors? Nothing — you'll love everything about this "Chrissy-mas" show. And it's the perfect kickoff to the holiday season to get that "ba-humbug" out of your system. If you're not sure how to watch A Legendary Christmas, I've got you covered.

As if the gift of John Legend's buttery voice isn't enough, he and Chrissy's holiday spectacular, A Legendary Christmas, kicks off on Wednesday, November 28 at 10 p.m. ET on NBC. It is also possible to stream NBC through your TV network provider on any device for complete bliss. Today said the hour-long special will showcase a lot of John and Chrissy's friends, musicians, entertainers, and more. Megan Trainor, Kenan Thompson, The Voice judges: Blake Shelton, Adam Levine, and Kelly Clarkson, and Queer Eye's Fab Five will all take part in the show. A Kardashian, a Jenner, and maybe a few of the kiddos will appear. There's even said to be a special scene with the power couple's daughter, Luna. It's hard to say if Chrissy will do any singing, but knowing her, you may want to tune in just in case. I mean, she's known and treasured for her unpredictability so set the DVR even if you're not home to watch it live. You can watch the A Legendary Christmas promo clip to see her dancing along with celebrity friends, at the very least. Consider it an early gift, from me to you.

The show will feature Legend's songs from the album of the same name, all in the name of Christmas. The album, executive-produced by Raphael Saadiq, came out around Halloween — just in time to get everyone in the festive spirit — and is coupled by a tour that began in November. The tour is 25 cities all before December 20. That's a whole lot of Legend and I'm not mad about it. Vulture has the full list of A Legendary Christmas album song titles for your eyeball enjoyment and Billboard has the audio for "Have Yourself a Merry Little Christmas" and "Bring Me Love." Basically, this is the best day ever. Hopefully it'll spark some holiday cheer. Musicians like Stevie Wonder and Esperanza Spalding appear on tracks like “What Christmas Means to Me," but there's also the must-haves such as “The Christmas Song (Chestnuts Roasting on an Open Fire). Legend even penned a few originals because, as an EGOT recipient and, you know, the Jesus Christ Superstar, he can.

With comedic guests like Zach Galifianakis or Glee's Darren Criss, you should expect some laugh-out-loud humor and seriously swoony singing. I'd expect, knowing John and Chrissy as I do (I don't), everything will be bold, bright, and oh-so them. There's seriously no better show to make you feel all the Christmas feels in all the best ways. So gather up a pile of cozy blankets, get ready to kick your feet up, and make sure you don't have too many things recording at once, because November 28 is the true beginning of the holiday season. Whatever A Legendary Christmas has in store, I'm sure it'll leave you feeling like you'll have a "Merry little Christmas," and that's not nothing.