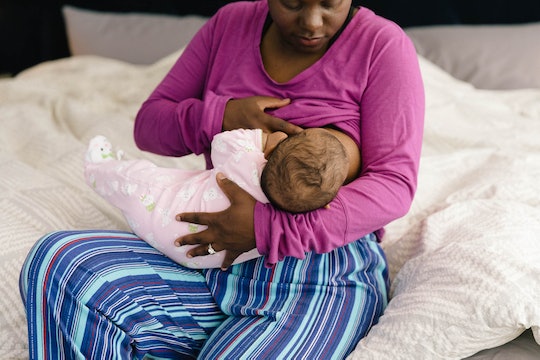 You know how the old saying goes: Another day, another Republican attempt to dismantle Americans' access to affordable health care. After two spectacular failures earlier this year, the GOP has introduced a third "repeal and replace" bill aimed at destroying the Affordable Care Act. And if you're wondering how Trumpcare 3.0 will affect breastfeeding moms, hold on to your butts, because you're in for a big shock: it would, like the two before it, completely ignore them. I mean, honestly, what were you expecting?

Although President Donald Trump and company routinely insist that every new GOP healthcare plan will offer better coverage for less money, that's simply not possible. Health care costs money, plain and simple. And since saving a buck is a core value of the Republican platform (saving a life, not so much), when it comes time to choose between better coverage and lower taxes, they unfortunately tend to go with the money. First the American Health Care Act scrimped on coverage, then the Better Care Reconciliation Act cut even more. But if you thought they were bad, just take a look at the newest plan, the Graham-Cassidy Bill, which is the worst one yet.

The Affordable Care Act helped breastfeeding moms in two distinct and very important ways: first, it mandated that health insurance plans cover "breastfeeding support, counseling, and equipment for the duration of breastfeeding" including the cost of breast pumps, which can run you a couple hundred dollars for a good one. The ACA also requires large employers to provide "a reasonable break time for an employee to express breast milk for her nursing child for 1 year after the child’s birth each time such employee has need to express the milk." And not just anywhere; it also requires employers to provide "a place, other than a bathroom, that is shielded from view and free from intrusion from coworkers and the public, which may be used by an employee to express breast milk." Thanks, Obama!

The Graham-Cassidy Bill, on the other hand, makes absolutely no mention of breastfeeding (or breasts at all, really, other than one brief shout-out to breast cancer). It's almost as if South Carolina Sen. Lindsey Graham and Louisiana Sen. Bill Cassidy didn't consider the health and well-being of breastfeeding women, or any women for that matter, when crafting legislation that would directly affect said health and well-being. But that would be ridiculous, right?

Those Obamacare protections are crucial to mothers who wish to breastfeed, because it's 20-freaking-17, and most moms work these days. Forty percent of U.S. households with kids "rely heavily on a mother’s income," according to the Washington Post, but only 13 percent of U.S. workers have access to any kind of paid leave. And by paid leave, we're not just talking full-salary do-what-you-gotta-do leave, that's accounting for sick time and personal time, too. It's the reason why 23 percent of moms return to work after less than two weeks of maternity leave. Unsurprisingly, this disproportionately affects uneducated women, low-income women, and women of color.

So what happens to breastfeeding moms who didn't get access to a lactation consultant, can't afford a fancy electric breast pump, and are relegated to 15 minutes in a bathroom stall if they need to pump? They give up. According to TIME, a 2012 study published in Pediatrics found that only 32 percent of moms who intend to breastfeed exclusively actually end up following through. An incredible 42 percent of them didn't even make it one month. And why do women quit breastfeeding earlier than they wanted to? According to USA Today, it's either because it's too difficult, or they have to go back to work. Supporting women throughout their breastfeeding experience seems like a no-brainer to me, but then again, I'm not a senator.