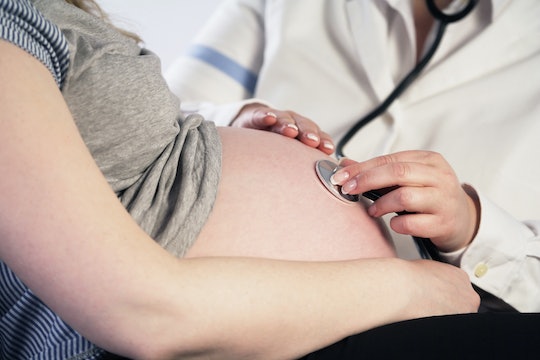 The Trump Administration announced on Thursday its plan to create a new division with the Department of Health and Human Services, called the Division of Conscience and Religious Freedom, according to ABC News. The new division, which Acting Secretary of HHS Eric Hargan detailed in an official press conference earlier today, will give doctors and nurses the option to refuse certain patients based on religious and moral grounds. Needless to say, this new division sounds pretty scary, and if you're wondering how President Donald Trump's religious freedom protection could hurt pregnant women, you're not alone. Unfortunately, it looks like this new division could put a lot of parents in harm's way.

In Hargan's announcement, he made a sweeping statement about Trump's supposed commitment to "uphold the rights of conscience and religious freedom," and his desire to make America "more diverse and more free."

President Trump promised the American people that his administration would vigorously uphold the rights of conscience and religious freedom. That promise is being kept today. The Founding Fathers knew that a nation that respects conscience rights is more diverse and more free, and OCR’s new division will help make that vision a reality.

The problem with Hargan's statement, however, is there's nothing "freeing" about denying patients the right to medical care, especially when it comes to parents who are in life-threatening situations.

Hargan also argued, according to NPR:

For too long too many of these health care practitioners have been bullied and discriminated against because of their religious beliefs and moral conviction.

And as for what Hargan meant when he said that health care practitioners have been "bullied," he was probably referring to a change made under the Obama Administration to the Weldon Amendment, which is a "federal statute enacted to protect the conscience rights of health care providers who do not want to participate in certain services that go against their convictions and values," according to Illinois Right To Life.

During President Barack Obama's first term, he rolled back the protections of this amendment so health practitioners wouldn't be able to discriminate against patients, according to The Washington Post.

Unfortunately, bringing back the values of the Weldon Amendment will negatively affect countless pregnant women. Take a look at who the Division of Conscience and Religious Freedom will hurt the most below.

Under this new division, the lives of countless LGBTQ parents could be put at risk. For instance, if a pregnant person who also happens to be transgender is suffering from a potentially life-threatening condition, like preeclampsia, a doctor could refuse to treat them under the guise of religious freedom, according to Teen Vogue.

Or, another frightening possibility to consider is that a doctor could potentially disregard the medical input of a pregnant person's partner during a life-threatening situation, especially if they don't morally agree with same-sex marriages.

And, on a smaller scale, a nurse could prevent a pregnant person's partner from being present in the delivery room while she gives birth. Obviously, not having your partner by your side during such a critical and important time could be emotionally damaging and traumatic, not to mention it strips you of the right to make your own medical decisions with your partner involved.

When you go to the doctor, it's standard practice to fill out of what medications you are or were on. And, it goes without saying that you should feel safe and secure about revealing this type of sensitive information to a medical professional, right?

Unfortunately, once this division kicks into high gear, doctors will be able to discriminate against pregnant women who have used contraceptive pills like birth control, for example, according to The Hill.

Of course, some pregnant women might decide to leave out pertinent and critical medical information to avoid being discriminated against, which could ultimately lead to dangerous consequences.

If you're a pregnant woman who has had an abortion, you could definitely be targeted by Trump's religious freedom protection, according to Politico.

For example, an anti-abortion doctor could deny a woman medical care or a life-saving procedure if they find out that she previously had an abortion.

Another scary possibility is that a doctor might refuse to terminate a life-threatening pregnancy based on moral objections.

In America, there are about 750,000 teen pregnancies each year, according to Do Something.

This staggering statistic is terrifying in the context of the Division of Conscience and Religious Freedom because it gives countless doctors the right to refuse medical treatment based on their views about pre-marital sex, according to The Independent.

And in the delivery room, a nurse who is against pre-marital sex could refuse to give a teen mom an epidural while she's in labor, for example. In fact, it's already happening in some states across America, like Ohio, according to NPR.

This "religious freedom" division, many argue, will just give strictly religious doctors the right to discriminate against patients who live lifestyles they don't agree with. It could be dangerous, and it certainly does not uphold the Hippocratic Oath to do no harm.