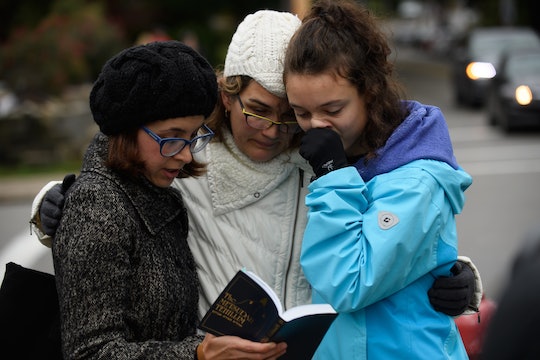 A total of 11 people were killed by an anti-Semitic gunman on Saturday at the Tree of Life synagogue in Pittsburgh, Pennsylvania, according to CNN. Among the victims were a husband and wife, and a pair of brothers, according to The Sun. And if you're wondering how you can help the Tree of Life synagogue survivors and their families amid this tragedy, you'll want to check out these four options.

Stein was a new grandfather who was "willing to help anybody," his nephew, Steven Halle, told the Pittsburgh Tribune-Review. “He was somebody that everybody liked, very dry sense of humor and recently had a grandson who loved him," he said.

Mallinger, the eldest victim, was not a Holocaust survivor as has been widely reported. "Rose Mallinger was my dear friend’s great aunt. She was not a Holocaust survivor," Sara Yood wrote on Twitter. "Please remove this misinformation - I am trying to do this work on behalf of the family so they don’t have to deal with it Thank you. #PittsburghSynagogue #TreeofLife."

Of course, it's understandable that a lot of misinformation is spreading during this stressful and upsetting time. In addition to remaining vigilant about misinformation, people can help out survivors and their families by donating money and blood, to name a few options.

"The first thing you do is take care of the victims,” Peduto said. “Pittsburgh is stronger than hate."

On that note, here's how you can assist the Tree of Life survivors, their families, and the Jewish community in Pittsburgh.

One of the first things you can do is donate money via GoFundMe. The official fundraiser set up for those affected by the shooting states:

An anti-Semite attacked and killed several attendees to a baby’s bris at a Pittsburgh synagogue. This fundraiser is meant to help the congregation with the physical damages to the building, as well as the survivors and the victims’ families. Respond to this hateful act with your act of love today. All funds raised will directly go to the Tree of Life Congregation from GoFundMe, and there is no third party intermediary.

In addition to the 11 fatalities, six people — including first responders — were injured in the shooting. Donating blood will help the injured, as well as anyone who might need it in the future.

"Hey Pittsburgh, Central Blood Bank has put out an appeal for donors, especially if you’re O+ or O- type," one supporter wrote on Twitter, while providing a link to blood donation centers. "If you’re able to donate, put in your zip code here for nearby locations that are open today."

Donate To Tree Of Life

If you want to donate directly to the Tree of Life, the synagogue has a link on its website where you can do so.

"Donate to support programming, our cemetery, facility maintenance, our school, or auxiliaries," the Tree of Life's website states. "Contributions may be made by sending a check, calling the office, or online through Paypal (below) or your member account."

Report Any Instances Of Anti-Semitism

One of the most important things you can do during this time — and going forward — is to speak out against anti-Semitism. Although Twitter and Facebook don't always take action when they should, it's still important that you report any instances of anti-Semitism you come across on social media. The shooter, for instance, openly expressed anti-Semitic views on social media, according to People, and this type of rhetoric shouldn't be tolerated.

If you're in the position to help the Tree of Life community, please do so. It goes without saying that the community needs all the love and support it can get right now.