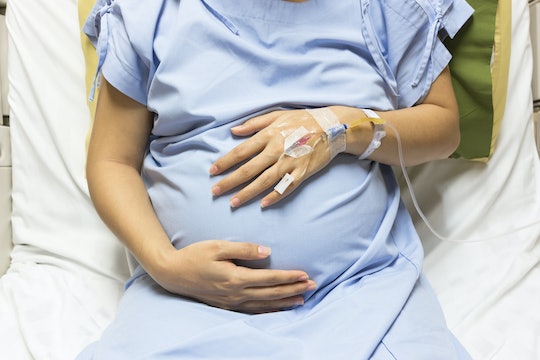 Here's How You'll Feel After You Get Pitocin, Because It Pays To Be Prepared

It's impossible to know what's in store for you when it comes to labor and delivery. It doesn't matter if it's your first time or your fifth, if you have an extensive birth plan or no plan at all; some things are mysteries and childbirth is one of them. That doesn't mean you can't prepare to the best of your ability, though. In fact, it's probably a good idea to ask as many questions as possible before those contractions kick in, especially if they're aided by medication. So even though how you'll feel after you get Pitocin depends on numerous factors (and every pregnant woman will respond somewhat differently) it's worth looking into if you plan on being induced, having an epidural, and, well, even if you don't.

According to the Mayo Clinic, how you react to Pitocin, and how long it takes for the cervix to "ripen" and labor, is entirely dependent on you as an individual. The clinic adds that the use of this medication, which does cause contractions, could cause them to be too strong and, in rare cases, can tear the uterus. The feeling of Pitocin, as well as the potential side effects, can vary, but the Safe Birth Project says nausea and vomiting are most frequently reported. There's also a study published by the National Library of Medicine National Institutes of Health that cites women may experience a more painful labor and delivery with the use of Pitocin and, as a result, may receive more epidurals than women who are not administered Pitocin during the early stages of labor and delivery.

It should be noted that The American Congress of Obstetricians and Gynecologists argue there should be limited intervention during childbirth (i.e. using Pitocin when it isn't necessary). In fact, the safety of its use has been questioned more than once, and another study highlighted by ABC News found that babies born under the use of Pitocin spend, on average, 24 hours longer in the NICU and tested with lower Apgar scores than babies born to mothers who weren't administered the drug during labor.

Though there are risks associated with the use of any drug, it's worth remembering that Pitocin is commonly given to women in labor, and once it is administered a woman is continuously monitored throughout the labor and delivery process. In fact, the Center for Disease Control and Prevention (CDC) found that more than an estimated 23 percent of pregnant women underwent induction, with the use of Pitocin, in 2010. In other words, if you choose and/or end up needing to use Pitocin, you are not alone in any capacity.

If you're trying to determine how you might feel after an induction with Pitocin, know that it can take upwards of an hour to begin working. The sensations start as cramps and then progress to harder, more intense contractions. Fit Pregnancy emphasizes the use of a fetal monitor when Pitocin is involved because the quick and heavy contractions can stress the baby (and mom) out. It's important to tell your doctor and nurses any symptoms you're experiencing while being induced.

In the end, each woman will have an experience during labor and delivery that is uniquely her own. If induction is imminent, and Pitocin is on the horizon, do your research and discuss any concerns you may have with your doctor so you don't find yourself alarmed in the middle of all that laboring.