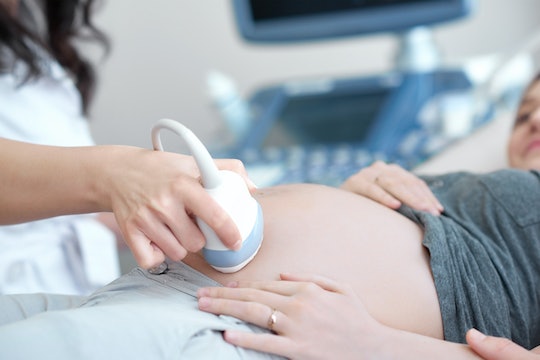 Here's How Your OB Knows Your Baby Is Breech

Getting to the "finish line" of pregnancy includes jumping over some last minute (but very important) hurdles. Your health care provider will still be watching for the usual things, like your baby's heart rate, any signs of infection in your urine, and your blood pressure. But at around the 36 week mark, your doctor will also be screening for strep, doing pelvic exams to check your cervical changes, and checking to see what position your baby is in. So, how does your OB know your baby is breech? I mean, sure, your friends and family members may claim to be able to tell where your baby is positioned just by looking at you or touching your stomach, but make no mistake: your doctor is the the real expert on the subject.

The American Pregnancy Association (APA) explains that health care providers are able to determine whether your baby is in a breech position by placing their hands on your abdomen to locate the baby's head, back, and buttocks. If they think your fetus might be a breech position prior to birth, one way your health care provider can confirm it is by doing an ultrasound. The American Congress of Gynecology (ACOG) states that a pelvic exam is another way that doctors can confirm a breech. In other words, your doctor has a few options, and he or she will likely choose the best method based on your baby, your body, and your specific pregnancy.

For those who aren't familiar with why breech is not the usual way moms-to-be roll into labor, here's the deal: As ACOG explains, in most pregnancies, towards the last weeks of pregnancy fetuses usually move so their heads are positioned as the first body part to exit the vagina during birth (also called a "vertex presentation"). But with a breech presentation — which, according to ACOG, happens in 3 to 4 percent of full-term births — the fetus's head, feet, buttocks, or both feet and buttocks come out first during childbirth.

There are three different types of breech birth presentations, and they are mostly categorized by which body part (or parts) of the baby is aimed closest to the birth canal. According to the APA, a "complete breech" is when the baby is presenting buttocks first with its legs folded at the knees and its feet near its buttocks. A "frank breech" is when the baby presents buttocks first with its feet near its head. And a "footling breech" is when one or both of the baby's feet point downward and will deliver before the rest of the body.

Your doctor might try to turn the baby to increase your chances of having a vaginal birth. The technical term for rotating the baby from a breech position into a "vertex" presentation is called, according to WebMD, an "external cephalic version" (ECV). It is a quite painful procedure (endured personally by the author of this article), that involves rather intense (though experts will probably describe it as "firm") external application of pressure to the abdomen.

So, just how successful is an ECV? As ACOG explains, more than half of attempts at the procedure succeed in turning the fetus to the vertex presentation. But don't get too excited just yet. Some fetuses will turn back into their breech position after having been turned via ECV to vertex (I know! So unfair!). ACOG states that you can try ECV again, but cautions that it is harder to do this particular procedure as your due date approaches and there is less room for your baby move.

The site What to Expect suggests some alternative therapies to the ECV, such as hypnosis and moxibustion (i.e. having an acupuncturist burn mugwort near your toe, and no, I am not making this up) if the procedure doesn't sound particularly pleasant or worthwhile to you. It is worth mentioning, though, that these natural methods have not been scientifically proven to work.

Causes of breech are not fully understood. According to What to Expect, there could be multiple factors at play, including placenta previa, being pregnant with multiples, uterine abnormalities (e.g. fibroids), fetal abnormalities, or having too much (or too little) amniotic fluid.

If your baby remains breech on the day of your delivery, you may require C-section delivery, though some doctors or midwives might feel comfortable attempting a vaginal delivery. No judgement, but try to go with what the health care providers you've trusted during this 40 week (more or less) pregnancy journey are urging you to do. It is most likely what is the very best for the health of your baby.

More Like This
A C-Section Actually Doesn't Take As Long As You Think, According To Experts
Can The Way You Sleep Really Turn A Breech Baby?
These 4 Sleeping Positions Will Keep You Comfortable After A C-Section
13 Creative & Cute Mother’s Day Baby Announcement Ideas