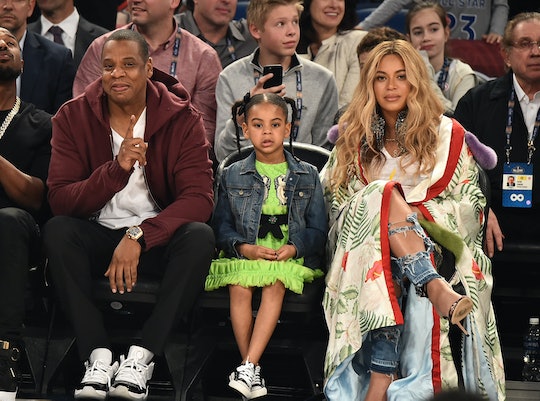 The One Thing Beyonce Should Know About Raising Twins

According to multiple news reports, Beyoncé has finally given birth to her twins. Although we don't have much info yet about the twins' birth, as the proud parents have yet to publicly comment, as a mom of twins myself (who were coincidentally also Geminis), I'd like to give Bey some advice, from one twin mama to another, so here's the one thing Beyoncé needs to know about raising twins: Bey, you won't be getting any sleep for a looooooong time.

While we still don't know when Bey's twins were born, I had my twins, Mia and Laila, a month early, and unfortunately I wasn't able to bring them home from the hospital right away. Both needed feeding tubes, and my first twin, Mia, needed oxygen, as her lungs weren't fully working on their own yet. They were in the hospital for a week, and they let me stay in a room near the NICU so I could breastfeed them when needed.

In between feedings, I did manage to get a few hours of sleep — but it wasn't much. Between worrying about the babies and being woken up to feed them, I was probably only sleeping for about an hour and a half at a time. But I still had time to relax: for the most part, I just lay in my bed and waited until the nurses came around with my babies. At home, however, it was totally different.

Like Beyoncé, I had another child at home: my then-2-year-old daughter Ani. If you've had a 2-year-old, you know that is not the calmest age. Ami wasn't especially rambunctious, but she did need a lot of attention, like any other 2-year-old. So once my husband went back to work after two weeks, I was on my own with three children.

You know how people always recommend that parents "sleep when the baby sleeps?" Well, that's a load of crap when you have twins. How was I supposed to sleep when both babies were sleeping at two different times? When they woke up hungry, I would breastfeed them or their dad would give them a bottle with my expressed milk. But then how was I supposed to rest when my toddler needed lunch, or hugs, or just wanted to play?

Breastfeeding twins is an enormous challenge in itself.

Now, I'm sure Beyonce has a great deal of help in the form of nannies, baby nurses, and housekeepers. But if she chooses to breastfeed (which she did with Blue Ivy), she's probably gonna be getting up at night with the twins — and breastfeeding twins is a challenge in itself.

In the hospital, I had a ton of help. I had several nurses who helped me latch the girls on. They also taught me how to hold them and told me when I should switch sides. The Mayo Clinic recommends you start out nursing both babies at the same time, so I kept on doing that when I got home, but I was so sleep-deprived that things got confusing. I kept forgetting which twin was on which side last time, so I created a system: Laila's name began with an L, so I always started her on the left boob. I know that sounds silly, but hey, it worked.

My husband and I decided to sleep in shifts: I'd pump milk at 8:00 p.m. for him to feed the girls, then I'd get up at 2:00 a.m. to breastfeed them. This system was not the best: I was sleep-deprived and constantly on edge, so my husband and I started fighting with each other over every little thing. If he so much as moved one of the twins' bottles, I would snap on him.

For a few years, my husband and I spent almost no time together, other than while taking care of the twins.

One night, after my husband accidentally mixed up the twins and called one of them by the wrong name, I got so frustrated that I ran out of the house at 5 in the morning. I drove all the way to my mother's house, which was 20 miles away. There was barely any traffic on the roads and the sun hadn't come up yet. Once I realized what I'd done, I was terrified that I'd messed up my marriage forever. We made up, but for a few years afterward, my husband and I spent almost no time together, other than while taking care of the twins and my oldest child.

Considering how little sleep I got during the twin newborn years, looking back on it, I'm surprised I remember this much. If I could've afforded help, or had a family member come stay with me in those first days, I'm sure I would've had it easier, but even if Beyoncé does have a ton of help, she should know that having twins means you're breastfeeding almost constantly and getting very little sleep — and that it might temporarily affect her marriage. Still, we got through it and the twins are happy and healthy. Beyoncé should also know that if she chooses to have another child after this, going back to taking care of one baby feels like a breeze.

More Like This
Can You Give A Sleeping Baby A Breathing Treatment? Experts Explain
Real Parents Share What Time They Let Their Kids Rip Into Gifts On Christmas Morning
What Exactly Is The Ferber Method? The Sleep Training Approach, Explained
Here’s What To Do If Your Baby’s Nose Bleeds After Suctioning