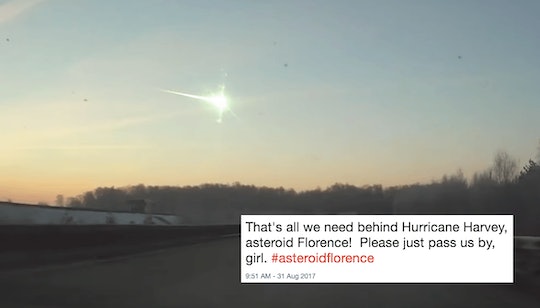 Here's The Deal With That Giant Asteroid Passing Earth

It was less than a week after people all over North America craned their necks to watch the first total solar eclipse to traverse the United States for the first time in nearly a century that our attention was dealt back to Earth as Texas was hit by Hurricane Harvey. Now, it's time to turn our eyes back to the skies as on Friday, a giant asteroid will pass Earth. No big deal, right? Well, it is a big deal, and not just because of the mammoth space object's size: The asteroid is expected to pass uncomfortably close to Earth.

Asteroid 3122 Florence — named for Florence Nightingale — is what NASA calls a "near-Earth" asteroid that will make a fly-by passing our planet on Friday. There's no stopping her: She's been well on her way towards our solar system for quite some time. Measuring at approximately 3 miles wide, Flo will make her way very close to Earth — but this is space close we're talking about here: According to NASA, the asteroid will pass by at 4.4 million miles from Earth, or about 18 times the distance of the Earth to the Moon. So, Florence is still very far away but perhaps just a little too close for comfort in terms of solar system scale.

What has some people particularly freaked out (read: scientists, me) about asteroid Florence is just how big it is. Here's a mental exercise for scale: The Burj Khalifa in Dubai is the world's tallest building, standing at just over a half mile tall. You may remember the Burg Khalifa from such starring roles as Mission: Impossible — Ghost Protocol and Furious 7. Now, imagine six Burj Khalifas stacked on top of each other — that's how big asteroid Florence is.

But fear not: Asteroid Florence, despite its size, is only making a close approach, and won't be anywhere near Earth's atmosphere — so you can stop with the mental images of say, Lars von Trier's Melancholia or even the very real Chelyabinsk meteor that fell over Russia in 2013. Planet Earth is going to be A-OK.

This isn't even the first time a major asteroid has buzzed this closely by our planet, either. A bigger asteroid came even closer to earth in December 2012, when Mayan calendar "it's end of the world!" mania was at its peak, no less. Asteroid 4179 Toutatis was a full kilometer bigger than Florence and came 100,000 miles closer to the Earth. And yet — here we still are, no less worse for wear.

While you might be thinking," But it's only been five years since the last major near-Earth object fly-by!" — it's more important to understand that Florence won't be making impact, and that's what really matters. NASA estimates that a car-sized asteroid hits Earth once every year that burns up before it ever reaches the planet's surface. Every 2,000 years, a football field asteroid hits Earth and causes major damage. As for those big guys floating out in space, like Florence or Toutatis? Impacts from asteroids larger than 1 kilometer (a little more than half a mile) happen about once every few million years.

Asteroid Florence won't be as short-lived as the solar eclipse: You'll actually have a couple of days to catch a glimpse of its fly-by during its peak brightness on Thursday and Friday. Though the asteroid is massive in size, Florence won't be seen by the naked eye from here on Earth, but if you have even a small telescope, you should be able to see asteroid Florence from your backyard. Happy asteroid hunting!