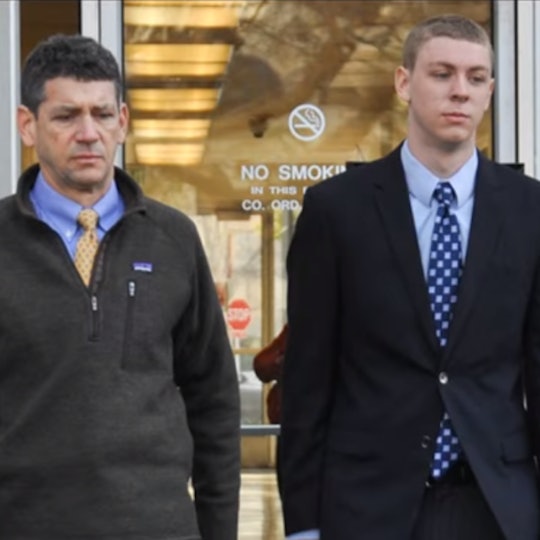 Here's The Definition Of Sexual Assault, Because It's Not "20 Minutes Of Action"

The Stanford sexual assault case produced three heroes and three villains. The heroes, obviously, are the two Good Samaritans who stopped the attack, and the brave, eloquent survivor, whose moving impact statement showed the world in gruesome detail exactly what she went through. The villains: Brock Turner, who was found guilty of three counts of sexual assault, Judge Aaron Persky, who sentenced the criminal to just six months of jail time, and Dan Turner, Brock's enabling father, who referred to sexual assault as "20 minutes of action" in his letter to Persky asking that his son only be sentenced to probation.

Over the past week, I've struggled with which of those last three men I'm most disgusted by: the defendant, the judge who excused his behavior, or the man who raised a monster and is now deeply offended that his sex offender son no longer enjoys steaks as he once did. Currently, I'm leaning toward the elder Turner, because it's no surprise that a man with such a shockingly flippant attitude towards sexual assault raised a child who grew up to commit such a vile crime. Sexual assault is not "action." It is a violent crime that leave lifelong scars – often physical, and nearly always emotional.

The United States Justice Department defines sexual assault as "any type of sexual contact or behavior that occurs without the explicit consent of the recipient. Falling under the definition of sexual assault are sexual activities as forced sexual intercourse, forcible sodomy, child molestation, incest, fondling, and attempted rape." Let that sink in, Mr. Turner. That's the kind of person Dan Turner raised. Brock Turner's crime was not drinking too much at a party. He was not convicting of highjinks or found guilty of promiscuity. He used another human being's body as an object for his own amusement, without her consent or even her knowledge. He brutalized her. He physically and mentally damaged an innocent woman in a way that has impacted her every single day since.

At the sentencing, the victim read her statement to the court, and I wonder, did Brock and Dan Turner actually listen to it? They may have been understandably preoccupied with the sentence and tuned it out. They should read it now. Everyone should read it. They need to know that the victim went to party with her little sister, and then woke up on a gurney covered in blood. They need to read her description of the moment she realized she was sexually assaulted, not because she remembered it (she was unconscious), and not because a nurse held her hand and broke it to her gently, but because when the hospital staff finally allowed her to use the bathroom, she discovered, to her horror, that her underwear were missing.

They also need to understand that the moment that Brock Turner climbed off of his victim was far from the end of her ordeal. At the hospital, she wrote, "I had multiple swabs inserted into my vagina and anus, needles for shots, pills, had a Nikon pointed right into my spread legs. I had long, pointed beaks inside me and had my vagina smeared with cold, blue paint to check for abrasions." She learned what Turner did to her not from the police, but from a news article. She was then revictimized in court, humiliated by the invasive questions posed to her by the attorney the Turners hired. She now has to sleep with a light on, and is terrified of being alone. Sexual assault may be "20 minutes of action" to the Turners, but to victims, it's a lifetime.