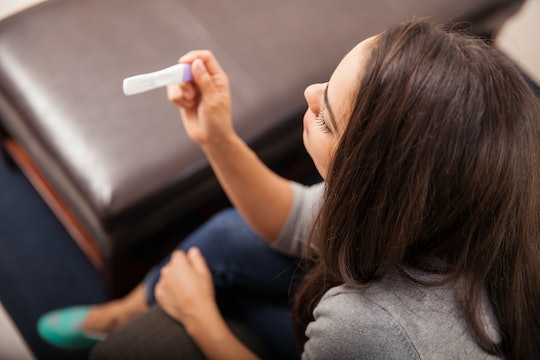 I'm going to go ahead and assume your mind was racing the moment you bought that over-the-counter pregnancy test, be it with hope or fear or both. Hey, some period cycles are predictable — down to the hour, really — but others are a crap shoot of stained underwear proportions. Either way, if you're sexually active the absence of your period could signal pregnancy. So what does it mean if you missed a period but got a negative pregnancy test? Turns out, there are a few things that might've happened, according to the experts.

Dr. Shawn Tassone, of Austin Area Obstetrics, Gynecology & Fertility, wrote in Pregnancy Corner that different tests provide different results, depending on where you're body is at. If you are, in fact, pregnant, but your test yields a negative result, it may be too early for the pregnancy hormone — Human Chorionic Gonadotropin (hCG) — to be detected. The farther along you are in the pregnancy, the higher this hormone is and, as a result, the easier it is to yield a positive pregnancy test.

If you've taken a pregnancy test after a missed period, and it turns out negative, you might want to wait a week and take a different test. Dr. Tassone went on to explain further, writing, "false negative tests happen more often than you might think." While there can be other underlying causes, it's important to rule out pregnancy completely before going about your day as, well, any other day.

Another reason for a false negative could be misuse of the test itself. The Medical Review Board on Very Well adds that waiting too long to read pregnancy test results, or using an expired test (make sure you check!) can also give the test taker a false negative. In fact, even the environment in which the test was scored could impact the test itself. If it's been in a humid environment, for example, it could be compromised and you'd be better off buying another.

If, however, you've gotten a false negative, waited, and taken a secondary test to confirm and your period has yet to arrive, don't panic. Menstrual cycles are notoriously delicate. Even if you've always been on a regular schedule, the slightest change in mood or lifestyle might alter when your period arrives, according to What To Expect. A variety of underlying causes could be to blame, too. Things such as stress, jet lag, breastfeeding, eating habits, medication side effects, and lifestyle can prolong your period. It's important to note what's going on in your life to eliminate factors that are "easily" fixed — such as getting more sleep or altering your diet — before assuming otherwise.

If you're still concerned, a doctor's appointment may be in order. Other reasons for a negative pregnancy test, as Healthline notes, include conditions such as Polycystic Ovarian Syndrome (PCOS), thyroid abnormalities, premature menopause, or even an ectopic pregnancy — a pregnancy that occurs when a fertilized egg travels to a fallopian tube, abdominal cavity, or cervix instead of attaching to the uterus — which can be dangerous, and potentially fatal.

If you have symptoms such as "sharp waves of pain in the abdomen, pelvis, shoulder, or neck, severe pain that occurs on one side of the abdomen, light-to-heavy vaginal spotting or bleeding, dizziness or fainting, and/or rectal pressure," you should seek medical help immediately. The American Academy of Family Physicians adds that an ectopic pregnancy happens in 1 of every 50 pregnancies, so if you've taken the proper steps to confirm a second test, but things still don't feel quite right, call your doctor.

While it's discerning, there are many reasons for a late period, despite a negative pregnancy test. If you've ruled out the most common explanations, and still haven't started your cycle, go see your doctor. It's the most absolute way to get the answers you deserve.