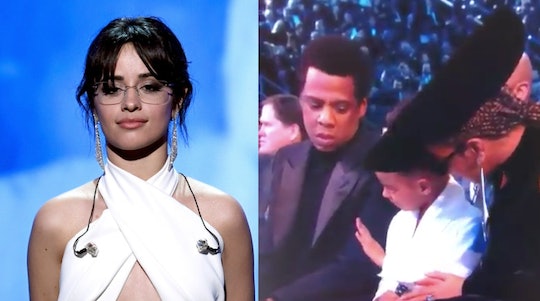 There was plenty to love at the Grammy Awards this year, but Blue Ivy shushing her parents during Camila Cabello's speech may have taken the cake. Now, the internet finally gets to know what Camila Cabello thought about Blue Ivy shushing Beyoncé and JAY-Z while she was up there onstage. And sure, Cabello may be a famous singer, but her thoughts are pretty damn relatable.

The "Havana" singer (and former Fifth Harmony member) did a new interview with Nick Grimshaw from BBC Radio 1 and, of course, they discussed the much-memed moment. In case you somehow missed it the first time around, at the ceremony in January, Cabello came onstage to present, and to express her support for Dreamers. When she said, "All I know is, just like dreams, these kids can't be forgotten and are worth fighting for," the audience burst into applause, but one young member of the crowd had a... different reaction. Blue Ivy did some strange, calm shushing gesture to her parents, with many on the internet imagining that Blue Ivy wanted them to quiet down so she could hear the rest of Cabello's speech.

Turns out, Cabello told Grimshaw, that she had no idea what was going on at the time, and that was definitely for the best because if she'd known that Beyoncé, JAY-Z, and Blue Ivy were right there in front of her, she might have freaked out. “Thank God that I didn’t look down," she said. "Just seeing them there, I would have been like, ‘Wow.’"

First of all, I often wonder how any newly-famous person manages to form words in front of their idols without turning bright red. If I realized I was presenting in front of Beyoncé, I'd probably forget how to pronounce my own name. But Cabello's other reaction to Blue Ivy's shushing was even more relatable.

As she told Grimshaw, when she found out about the shushing later:

I had a moment of insecurity. I surprised myself. I was like, "What does that mean?" I was like, I'm not going to go into this wormhole of, "Do you think she didn’t like my speech?" I literally stopped. I was like, "I’m not gonna think about that."

Of course she felt that way. Of course if you're not involved in the whole Blue Ivy shushing incident, you can find it hilarious, but if you're the one who was talking at the time, you're going to overanalyze everything. Honestly, I don't know how she managed to get out of her head about it so quickly. I probably would've lain awake for at least a night or two, staring at the ceiling and wondering if the 6-year-old progeny of America's music royalty hated me for some unknown reason.

Luckily, there's a comforting theory to fall back on: that Blue Ivy was actually so into Cabello's speech that she just wanted everyone else to shut up so the speech could continue.

And hey, Cabello's got another chance to get up on an awards stage and give a speech, without an adorable, scene-stealing kid becoming the focus of it all. The whole reason that she did this BBC radio interview was because she was in England to present at the 2018 Brit Awards, which are basically like the British Grammys. They'll take place this year on Feb. 21. Although who knows? The British are a much politer and more proper people, so maybe there will be even more shushing at that ceremony than there was at the Grammys.