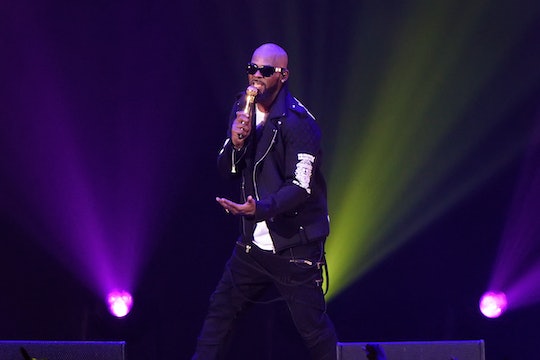 These Celebrities Are Bravely Speaking Out About 'Surviving R. Kelly'

To say that the Lifetime docuseries about R&B artist R. Kelly has taken hold of popular conversation would be an understatement. While it’s primarily us ordinary folks chiming in, some celebrities have shared their thoughts on the allegations of child pornography and sexual abuse against the man born Robert Kelly. Filmmaker dream hampton (stylized with lowercase letters) said that most musicians she contacted didn’t agree speak for the camera, and remained silent publicly. But some have, and here’s what celebs are saying about Surviving R. Kelly. R. Kelly did not immediately respond to Romper's request for comment.

One of the most notable comments comes from Jada Pinkett Smith. The actress and creator, who has been bringing real and important issues to the table regularly since last year with her Facebook talk show Red Table Talk, posted a video of herself on Jan. 6 on Twitter, where she explained how she’s “having a really difficult time understanding why” R. Kelly’s music sales have actually increased since the docuseries began. Pinkett Smith wasn’t just sounding off though — she legitimately wanted to know why, and asked for comments on Twitter and for a continued discussion on Facebook Live on Jan. 9. Her closing statement really says it all: “I really don’t want to believe it’s because black girls don’t matter enough. Or is that the reason?”

Chrissy Teigen is known for putting her opinion out there, no matter how controversial. She responded to a fan who tweeted at her praising her husband, singer John Legend, who is the only one of the artists contacted by hampton who agreed to speak on camera. Teigen acknowledged her husband’s bravery, but also put the focus back on the women who spoke about their own traumas.

Omarion, a singer who you knew in the early ‘00s as a member of R&B boy band B2K, decided to join the conversation, but his statement was a little scattered: He did the thing where he acknowledges the crime, but with the caveat that the alleged perpetrator wasn’t solely responsible for whatever reason (in this case, indicating a possible mental health issue). So make of that what you will.

The always-flawless Kerry Washington posted about Surviving R. Kelly, promoting the docuseries but also telling those who don’t think they can watch the triggering material, especially those who are survivors of sexual assault and trauma, to take care of themselves. Just when you thought she couldn’t be more amazing.

Chance the Rapper made some very interesting and insightful comments as well. In a video clip from an interview, he spoke about the oppression of both black men and women, noting that the latter are “exponentially higher oppressed and violated.” There was controversy over his last comment, in which he addressed why he may have ignored the allegations against R. Kelly that were made long before he and the accused recorded “Summer In Paradise” in 2015. But Chance added a couple of follow up tweets after this, and seems to clarify that he is on the side of the victims.

Also important is who is not speaking out. Perez Hilton, The Real Housewives of Beverly Hills’ Brandi Granville, and more have called Lady Gaga to action. The singer, who just won a Golden Globe for her original song “Shallow” from A Star Is Born, worked with Kelly on the single “Do What U Want” in 2013, and many are calling for her to use her platform to disavow Kelly, especially given her past work with survivors of sexual assault. I think it’s worth noting that as a white woman, Gaga has an important role to play here in supporting black women and girls, and the fact that at least two white people have called her out on this is a positive step.

A few others, such as Shark Tank star Daymond John, Community actress Yvette Nicole Brown, and rapper Meek Mill, have also addressed the docuseries. But there’s still a long way to go, and hopefully the spotlight on Kelly’s case and others like it will be just the start in continuing the reckoning of movements like this.