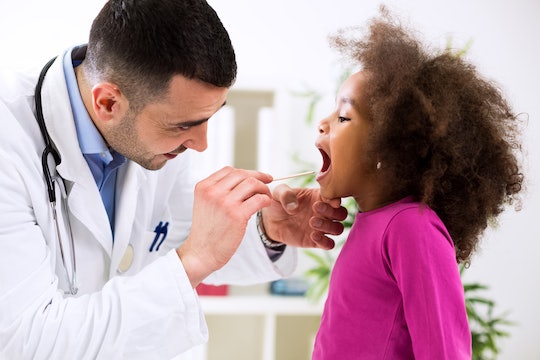 This Overlooked Health Care Issue Could Be A Disaster For Kids

Health care has been a flashpoint dividing Republicans and Democrats in Congress as conservatives have tried and tried and tried again to find a way to dismantle the Affordable Care Act — also known as Obamacare — since President Donald Trump took office. But even with their latest scheme to disrupt the coverage of millions of Americans officially failing, not all Americans are in the clear. In fact, it's now the insurance of some of the nation's most vulnerable — children — that's on the line. On Sept. 30, federal funding for the Children's Health Insurance Program (CHIP) is set to expire, and there's no guarantee that lawmakers will act to preserve it before it's too late. Ladies and gentlemen, it's time to start calling your representative again, because what could happen to kids when CHIP funding expires is beyond unacceptable.

For starters, CHIP currently insures about 9 million children from families of low- and middle-income backgrounds with incomes too high to qualify them for Medicaid. Although it's administered by individual states, the program relies on federal funds to survive — and Congress is coming dangerously close to allowing the looming deadline to pass without any action to preserve this lifeline. Why? According to Vox, a bipartisan plan to extend the funding was derailed by the Senate Republicans' ultimately unsuccessful last-ditch effort to repeal the ACA with a relaxed, 51-vote majority, a project that also carried a Sept. 30 deadline.

The slow-simmering revelation that Republican leadership had not managed to scrounge up the votes to replace the current health insurance system with one that would have left millions more uninsured was a sure victory for progressives. But, until CHIP is safe, it's simply too soon to celebrate on the health care front.

Because, without the reauthorization of the federal funding, states will run out of money to insure millions of kids in a matter of months. While some states have the reserves to keep the programs running through much of 2018, others would be in even more immediate trouble if Congress does not act — and fast. Axios reported last month, for example, that funding in Arizona, Minnesota, North Carolina, and Washington, D.C., would end up completely drained of this funding by the end of the year. It also projected that no state would have money left to insure the CHIP kids after next September.

And that could end up being a giant problem for those children and their families.

Right now, CHIP makes it possible for 9 million American children to access inpatient and outpatient hospital care, lab and X-ray services, and well-baby and well-child care such as vaccinations. It also includes routine checkups, visits to the doctor, prescriptions, dental care, and vision care. All of this goes a long way in giving kids a quality of life they simply would not have if they could not go to the doctor regularly simply because of their families' income — that, of course, helps to control health care costs long-term, as well.

As Dr. Trina Lee Chang wrote in an op-ed for The Baltimore Sun published Wednesday, so many of the kids she sees at the Johns Hopkins Children’s Center's Harriet Lane Clinic — 90 percent of whom are covered by Medicaid and CHIP — deal with intense medical environment-based medical challenges:

Many of the kids I see at our clinic are already fighting an uphill battle against unhealthful environments of poverty, violence and persistent racial, ethnic and socioeconomic health disparities. Some come from homes where parents are working long hours in minimum wage jobs to make ends meet or in unstable homes with parents who have health problems. They experience “toxic stress” at an early age, which jeopardizes their short- and long-term health.

Ensuring that kids facing problems like these have reliable health care is "critical" to making sure they have the best possible outcomes. And in order to do so, these funds need to be authorize ASAP.