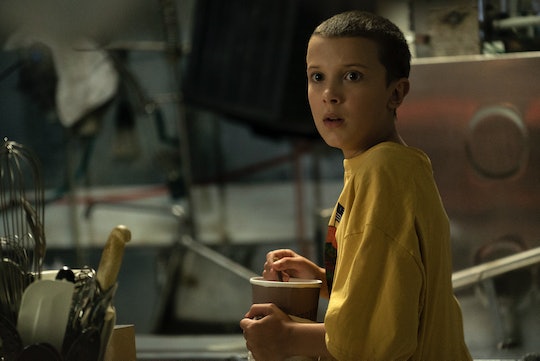 Here's What Eleven From 'Stranger Things' Looks Like IRL

Stranger Things became a cultural phenomenon when it dropped on Netflix last summer. The show, which was inspired by Stephen King and 1980s horror films, features supernatural elements and a parallel universe called the Upside Down. One such supernatural element is a girl named Eleven. She was born with psychokinetic abilities, and as a result, was experimented on by the Hawkins National Laboratory. Eleven escaped, but was distinguishable by her shaved head. In case you missed all the awards season this year, here's what Eleven from Stranger Things looks like IRL. Spoiler alert: she looks completely different, but just as adorable.

In Season 1, viewers found out a bit about Eleven's backstory. It seems her mother's name is Terry Ives, and she participated in a controversial government program called Project MKUltra. She became pregnant while going through MKUltra's experiments involving drugs and sensory deprivation. Her baby, Jane (which many fans assume was Eleven, though that has yet to be outright confirmed), was born with powers. She was then taken from Terry and brought to Hawkins Lab. It was at Hawkins National Laboratory that Eleven honed her powers of telekinesis and biokinesis. During one of their experiments, the Demogorgon escaped from the Upside Down into the human world. In the resulting chaos, Eleven herself was able to escape.

Not only does Eleven have psychic powers, but Stranger Things takes place in 1983, so it's safe to say that she and the actress who plays her don't share the same wardrobe. Eleven is portrayed by 13-year-old Millie Bobby Brown. After the first season, Brown became America's sweetheart overnight (even though she herself is English). While Eleven had a shaved head sometimes adorned with a blonde wig, Brown herself is a brunette. She usually sports slightly above the shoulder length hair, and graces red carpets in beautiful gowns.

Brown is the cover star of November's InStyle, where she talks about getting ready for awards shows (Brown is already a SAG Award winner and an Emmy nominee, so she's already an awards season vet). "Everything I wear has to go through every person on my team," she told InStyle about her red carpet outfits. "It has to go through my mum first. If she approves, it’ll go to my agents, and then, obviously, the last stop is my dad —and if he doesn’t like it, then I’m not wearing it. It’s as simple as that."

She works with a stylist to ensure that her look is age-appropriate. When Brown was named "worst dressed" for wearing a white dress to the MTV Movie and TV Awards earlier this year, the internet (including myself) was outraged. Insider said she looked "comfy but shapeless," as if that was a bad look for a 13-year-old.

Millie Bobby Brown's red carpet looks have been compared to Emma Watson's during her Harry Potter days. When dressing for everyday, though, Brown opts for brands like TopShop and Converse. It's doubtful that Eleven will don those mini dresses or Chucks on the show, but her appearance will change this season.

The final Stranger Things Season 2 trailer revealed a new look for Eleven: her buzzcut has grown into a curly brunette bob. Stranger Things executive producer Shawn Levy explained the change to Marie Claire: "We couldn't be so heartless as to make her shave her head all over again," he said. "So because Millie's hair was longer, and some of Season 2 needed that same buzzcut, we put all of her hair under a wig and then used visual effects to help make it look like a perfect match to the end of Season 1. So a combination of wig and VFX."

I'm excited to see Eleven rock a bob, but I think it's clear by now that regardless of her hairstyle or wardrobe, Brown herself is a talented and beautiful young lady, both inside and out.