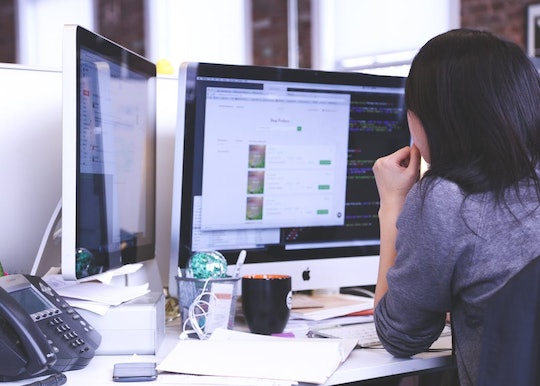 Here's What Happens When Moms Go Back To Work Too Soon, Science Says

Returning to work after giving birth, or — if you're one of the lucky ones — after maternity leave, can be an emotionally jarring experience. Whether you're thrilled to be back in the office or longing to be home, research has shown that going back to work too soon can be detrimental to moms' health. One study in particular has suggested a frightening connection between shorter maternity leave and postpartum depression.

Many moms don't have the option of taking their time returning to the workplace. The U.S. lags painfully behind the rest of the developed world when it comes to maternity leave and many families rely on dual incomes, so there is often pressure on moms to swap out the diaperbag for a briefcase sooner than they may like. In 2012, the Huffington Post reported that roughly 25 percent of mothers were returning to work just two weeks after giving birth. Despite the existing pressures to get back to work, moms should be cautious when deciding on the right time to do so.

This time of transition, accurately named "the fifth trimester" by author Lauren Smith Brody, past executive editor of Glamour magazine and a mother of two children, comes with a long list of hurtles for new moms to overcome — not least of which is deciding when exactly to jump back into a professional role. This is not a decision to be taken lightly, as there are some seriously negative side effects of going back to work too early, one of the most serious of which impacts moms' mental and emotional states after baby.

The Centers for Disease Control simply define postpartum depression as "depression that occurs after having a baby." But for many women, it is a more complicated experience than that. Symptoms can include feelings of anger, guilt, or isolation. While these symptoms are possible for any new mom, there are factors that contribute to whether or not women feel depressed after childbirth. Earlier examples of these factors include stress, loss of child, and the arrival of multiple children. One study suggests that short maternity leave is another one of these contributing factors.

The study, published in the Journal of Health Politics, Policy, and Law, examined data from the Maternal Postpartum Health Study for correlation between maternity leave and postpartum depression. The pool of participants consisted of more than 800 women in Minnesota, all of whom were employed and 18 years of age or older. Of these participants, 7 percent went back to work after six weeks, 46 percent after 12 weeks, and 87 percent after six months.

Depression symptoms were monitored periodically in the weeks following the women's childbirths, using the Edinburgh Postnatal Depression Scale. Perhaps unsurprisingly, those women who had longer leave durations reported significantly lower postpartum depression scores than those who went back to work sooner. Researchers were of the opinion that the Family and Medical Leave Guidelines, or FMLA, for leave duration may not be sufficient. In a press release for the study, lead researcher, Dr. Rada K. Dagher, said:

Employers should consider providing more generous leaves than the 12 weeks of unpaid leave granted by the FMLA through expanding the duration of leave given or providing paid leave or both.

While maternity leave duration is not always under a mother's control, these findings suggest what many of us already know: the U.S. needs to seriously reevaluate its approach to maternity leave — the wellbeing of the nation's mothers depends on it.