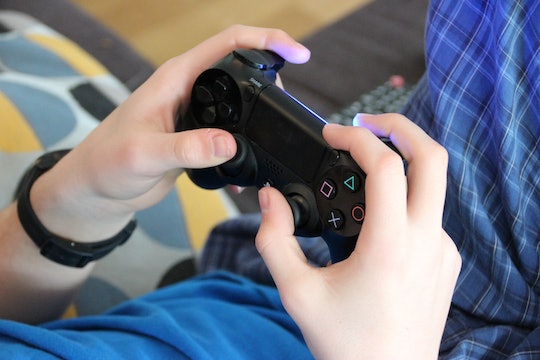 Summer may be in full swing, but there are still plenty of kids cooped up playing video games when it's too rainy or hot to go outside. Of course, you might shelve some of the more violent or mature video game titles from your kids and save those for your own personal late night gaming sessions. But before you hide every mature video game title from your kids for fear of what they might do to your kids' brains, there's good news for gamer kids and parents alike. According to a new study, here's what happens when your kids play violent video games.

A longitudinal study from the Netherlands found that 9-year-olds who played violent video games had no significant increase in aggressive behavior after one year of exposure. Other affirming findings from the study showed that video games didn't cause attention issues or "reduced social functioning" in kids, either. The study did find however, that there was a very small relationship between gaming and depression and anxiety in kids. Like everything in life, moderation is key here. Bottom line: Violent video games don't make violent kids, as much as that narrative may have been drilled into parents' heads since the 1990s.

As a gamer, I grew up playing video games. I still fondly remember going to the mall with my dad to buy Super Mario 3 and spending hours upon hours exploring the pixelated world of Mario and his friends, stomping on Goombas and jump-punching my way to gold coin riches. Let's be honest: The video games I grew up with were a lot different than the multi-million dollar grossing video game franchises that dominate a nearly $100 billion video gaming industry now.

When I was a kid, Mortal Kombat's signature "Fatality" move was the biggest shock of the video game industry.

Violence in video games today is a bit more realistic and graphic, as even this short GIF from Call of Duty shows:

Video game culture is more than just shooting characters on a screen while slamming back Cheetos and bottles of Mountain Dew. For many families — including my own — video games have become a way of family bonding time. Do I allow my son to play something as graphically violent as some war games? Of course not: He's 4 years old and we still call guns "blasters" in our home. But he'll happily sit and play Rocket League (think soccer with cars) with his dad. Are both war games and games like Rocket League violent? Sort of, but in very different ways.

Ultimately, this comes down to a definition of "violent," which while commonly used as a way of painting video games with a broad stroke, it's really more finely nuanced than that. There's a big difference between crashing cars to knock around a comically large soccer ball and executing the enemy with a sniper rifle. Even the study researchers themselves noted that nuance is a factor deserving of future study, as they concluded, "future research should better distinguish between different forms of gaming for more nuanced and generalizable insight."

So what does this all mean for family video game nights and even your kid's hours-long stretches of solo video gaming? Don't worry: Violent video games aren't going to turn your kid into America's next serial killer. The bottom line for parents of gamers is to stay involved, set limits, and make sure there's plenty else in your kid's routine besides video games.