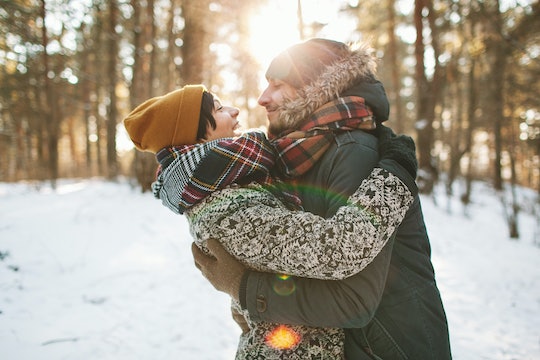 Solstice rituals and their history in ancient Europe (and elsewhere) have fascinated me since I first read Shakespeare's A Winter's Tale and the professor began discussing solstice traditions with the class — I've been utterly transfixed. Winter solstice, the shortest day and longest night of the year, has a deep pagan tradition, rich with festivals and holidays like Yule and Saturnalia. There is an abundance of superstition attached, especially for couples. So if you're pairing up this cold night, here's what it means if you get pregnant during the winter solstice.

According to modern pagan tradition, winter solstice is an especially loving time, filled with the hope of rebirth, according to pagan Reverand Selena Fox. This period of loving energy, and the rebirth of the sun, is thought to bring about new life. Modern pagans believe that winter solstice happens in preparation for the next shift in sunlight that happens on Beltane — or spring solstice. Getting pregnant during winter solstice would bring your child about during harvest, which is the most bountiful time of the year. Your child would also be born around Mabon, which, according to modern pagans, is an excellent time to encircle the closeness of your family, and keep your loved ones outside of exterior influence. Essentially, "Sorry, Aunt Greta, you're really not nice, and it's Mabon, so, you can't see the baby."

If you're a fan of Pliny the Elder — and let's face it, who isn't? — then you know from his epic collection Natural History, that the druids have a lot to say about solstice, its plants, and fertility. According to Pliny (we're on a first name basis), the berries of mistletoe that ripen in the winter have fertility boosting qualities, and thus are collected at that time.

Get this — legend has it that two white bulls were brought to the tree accompanied by a special druid who carried a golden sickle that was designed especially for the task of collecting the mistletoe off the oak. (Mistletoe is a parasite, not a plant of its own making.) After climbing the tree with a really big golden knife, they'd descend from the tree, use the sickle to sacrifice the bulls, and make a tonic from the mistletoe berries. They'd also eat the bulls. This was around 1000 BCE. No one was just wasting hundreds of pounds of beef. They would feed their mistletoe punch to not only the women of the village who hadn't had children, but also to goats, cows, and other livestock to ensure fecundity in the next year. It's also where we got the tradition of kissing under the mistletoe. Although, legend makes it sound like you'd need to go way past first base.

Nowadays, getting pregnant during solstice doesn't carry a lot of lore. Modern pagans believe that getting pregnant during any solstice is good luck, according to theology PhD candidate Sara Weinberger of New York City, New York. She tells Romper, "It's a time of renewal and good fortune. During the pre-Christian era, holidays like Yule were thought to bring good luck and were celebrated with evergreen hangings around the house to represent how life goes on, even in the dark of winter. Now, most pagans celebrate the life that can be created, too."

There isn't much modern tradition about what it means if you get pregnant during the winter solstice, in the way of how it will affect your pregnancy or your child, other than the aforementioned good luck. However, if you go by ancient tradition, having your baby at harvest is hard, but a blessing. Also, if you were necking under the mistletoe, and you got yourself a little solstice surprise? You only have yourself to blame. (But don't actually eat mistletoe, it's poison.)